To Keep Jerusalem Safe and Vibrant, The Communities in Judea and Samaria Must Grow

'US concerned over building in J'lem'
"Sometimes people have to move," US ambassador tells Post during tour of haredi neighborhood. 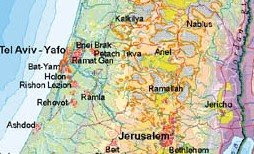 Take a good look at the map. We're not talking major distances here.

The world isn't going to protect us. How many UN Security Council Resolutions have there been condemning the Arab terrorists in Gaza for launching missiles at innocent Israeli civilians in Sderot, Ashkelon and the Negev?

"Sometimes people have to move," US ambassador tells Post during tour of haredi neighborhood.

Exactly. So tell the Arabs to git packin'!

Makes sense to me, and according to the US ambassador, it's perfectly fine.