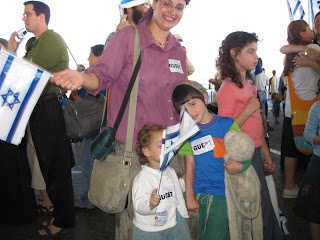 The OU, Orthodox Union, formerly known as the UOJCA, Union of Orthodox Jewish Congregations of America, is an America* first group, not Judaism first. *North America, including Canada

If it was Judaism first, then aliyah would be the priority, but it's an organization of North American Orthodox Jewish Synagogues. And because of that, it's promoting the strengthening of some of its weaker communities. These are cities with all that an Orthodox community needs, but apparently, the population is getting older, smaller or both.

Many of us in Israel see this an another example of the defacto anti-Aliyah orientation of the OU. At least if Nefesh B'Nefesh was to be equally featured for those looking to move... someplace else.

I'm not posting the OU link for their event, in principle!
Posted by Batya at March 27, 2008

How can we blame them?

When I announced that I was making aliyah, my parents' friends were really happy and supportive, but they also humourously warned me not to try and talk to their kids about it.

When you're living there and see the community, or another one dry up, you think that you want to do a Kidush Hashem and keep the commnuity alive, rejuvenate it. It's sad (frankly, it happens here in Israel too). On top of that, supposedly, there is pride in seeing a community bounce back - like in Germany, Poland, and Russia.

On the other hand, it takes a strong will for community heads to announce full support of aliyah - it's like shooting your own community in the foot.

I think that the OU has actually already made a strategic play into Israel. I would imagine that they simply do not think the time has come to call for aliyah, but frankly, from history, that call always comes too late.

The OU's entire reason for existance is to support North American Orthodox communities. It can be seen as a business. Sometimes you have to move your store.

I live in a community which has a long, colorful history. We brought it back from the dead. Too bad the OU won't support communities like mine, in the Biblical Holy Land.