A Little "Real Life" For The Prince

Was this pic of Prince Harry posed? It has the requisite racial variety, like a good movie or TV show. 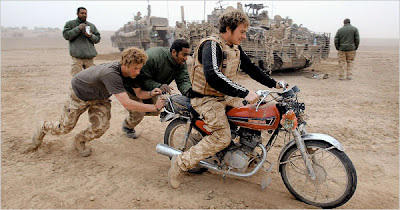 Apparently, Britain's Third In Line to the Throne enjoyed a dose of "almost normal life" until the beans were spilled.
It's interesting that, even today, serving in the army is considered part of the royal training in Great Britain. The United States doesn't have the tradition. The armed forces, there, is considered a way for the lower classes to progress. The "elite" families don't want their sons "mixing." In Israel connections and friendships made in the army follow are life-long.
I wonder if Prince Harry's time in uniform will really change him and make him more responsible and sensitive to "regular" people.

What's certain is that Harry's anonymous visit is now over. "It's very nice to be a normal person for once," he told British reporters. "I think this is as normal as I'm ever going to get." complete article