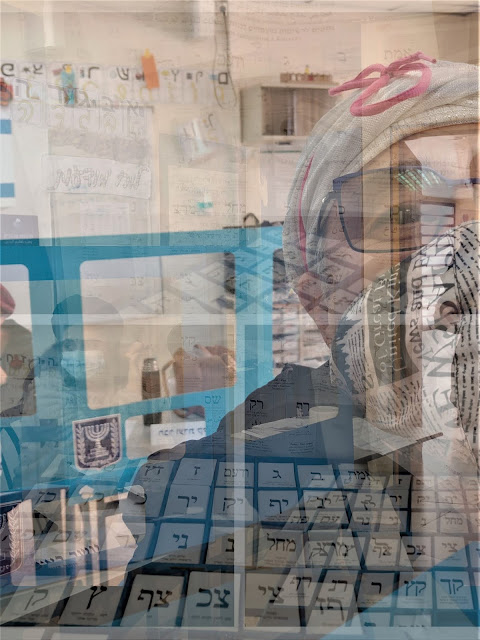 I think even the most experienced and capable of political pundits here in Israel are getting dizzy from all these useless elections. Not too many years ago, the minimum vote percentage a party needed to get Knesset seats was raised just to prevent a situation like we have now. But it seems like a political party of four plus seats is as stubborn and unrealistic, if not more, as single MK parties.

No matter how you play with the numbers/MKs, the only way a working/viable/realistic coalition can be formed is for party leaders and MKs to go against their sworn ideals/platform. Some MKs will need to leave their parties and join this unity coalition.

For me to say this isn't easy. I'm an idealist, a purist, but I'm also a pragmatist.

As a pragmatist I'm sure that over sixty elected Members of Knesset can find some basic workable positions in terms of economics, security, development policies that can be the basis of a lasting, at least for four/five years government coalition. It shouldn't be top heavy expensive with Ministers, like that monstrous ineffective farcical Bibi-Gantz agreement. Committee chairmanships should be the "diamonds on the crown." The public will like that much better. It's in the committees where the real work is done.

Gd willing, that's what we'll soon see. Let them leave their egos behind. The State of Israel needs unity not infinite elections.

On Love and Tyranny: The Life and Politics of Hannah Arendt, Book Review 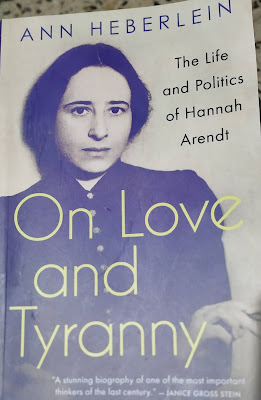 On Love and Tyranny: The Life and Politics of Hannah Arendt, by Dr. Ann Heberlein (Author), Alice Menzies (Translator) is a very readable book. I really must make a point of say that. I also have to admit that it is a much, much more interesting and compelling read than I had expected. I had feared it would be a heavy tome in weight and serious verbiage, but it's barely three hundred 300 pages including index and bibliography. And even more important, it's beautifully written and translated for ordinary people like myself. It doesn't read like an academic doctoral thesis.

So before I tell you about Hannah Arendt as depicted in On Love and Tyranny: The Life and Politics of Hannah Arendt, I want to make it very clear that I highly recommend the book. Buy it for yourself and as gifts for others.

I must confess that besides Arendt's name being vaguely familiar, I knew absolutely nothing about her before reading this biography. Hannah Arendt was born 1906 in Germany and had to flee the Nazis as a young woman, already involved in academic life. At first she thought she could stay in Europe, but  was forced to finally make her way to New York. No doubt an adventurous suspense-filled movie could be made about that part of her life, which included finding her husband and mother after they had all been separated.

It's now the Passover Holiday, which celebrates the exodus from Egypt, though it is said that only one fifth of the Jewish People left with Moses and Aaron. It has always seemed so hard to believe. How could anyone prefer slavery? But, davka, Heberlein tells us that when Arendt and all the other prisoners had the opportunity to leave Camp Gurs, the internment camp in which she had been imprisoned, "only two hundred out of seven thousand" left when they had the opportunity.

That's a lot less than one fifth. This fact in On Love and Tyranny is something I've been mentioning a lot when discussing the Haggadah and Passover.

The prisoners seemed more afraid of freedom than they were of the approaching Nazis. Arendt was in a small minority.

After trying to find refuge in Europe, she, her mother and husband fled to the United States. It wasn't an easy trip, but they finally arrived. In America they all had to learn a new language and build their careers from scratch. Yes, Hannah Arendt did the impossible and built a very successful life in America.

In  On Love and Tyranny: The Life and Politics of Hannah Arendt, you will learn of her private life, husbands, lovers, philosophical controversies and more. Arendt was a most fascinating woman who survived very dangerous and challenging times.

Hours to Go Before We Vote... 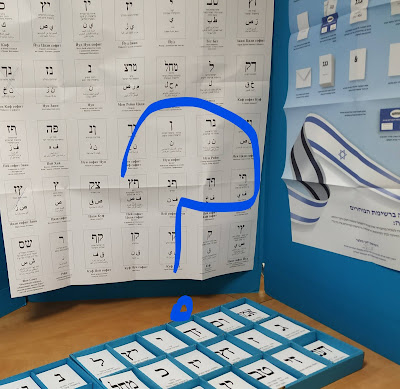 In just thirty-six 36 hours citizens of the State of Israel will go to the polling stations to vote for a new Knesset and Gd willing a viable new coalition government.

We vote for the pieces... meaning we choose a political party, and depending on what percentage of the total votes it gets*, those on its list will become MKs Knesset Members. It can be as little as zero or as many as a few dozen.

Then, after we vote and the votes are counted, the wheeling and dealing start in earnest. Usually the political party that ends up with the most votes MKs can manage to craft a coalition, but there have been exceptions.

Another political party which has a small chance of being included is Avigdor Yvette Lieberman's party Yisrael Beiteinu. He has a hard core of voters who give him, according to the latest polls, seven seats. He's more a spoiler than a kingmaker. His leaving the coalition a couple of years ago was the cause of the spate of recent elections. I don't trust Lieberman. He's neither right nor left, just an anarchist.

Even though there are four people running for the position of Prime Minister, in actuality we  can't vote for any of them. We vote for a party list and hope and pray that our choice party will be part of the ruling coalition.

Who's going to win? That's a good question. So far, ever since Yvette Lieberman broke up the last "normal" government, the citizens of the State of Israel have lost every election.

I don't take polls seriously, since they're just polls. But if you want to see what the polls are showing then check out Jeremy's blog.

My educated guess and gut feeling are that the actual count won't be completed until next week. There will be many more "double envelope votes" than usual. All of those soldier, hospital, jail, special COVID corona and quarantine polling stations will allow people to vote with a double envelop. Each outer envelope will have the person's ID number which has to be checked against the master list of those who voted in their official location. This is a very time-consuming process. If the ID number doesn't show up, then the ballot envelope is collected to be counted. And then all kosher votes are added and calculated, and then we'll know who the next one hundred and twenty 120 Knesset Members will be.

I don't think that the party leaders will have much of a Passover Vacation. But since all I can do is vote once and then pray... I'll enjoy the holiday.

*Actually the calculation is a bit more complicated, since not all parties get enough votes to have representation.

Every month, the first of the Jewish Month, Rosh Chodesh, we, a number of women from The Shiloh-Eli area, sometimes more and sometimes fewer, gather at the Place the Mishkan, Tabernacle rested for almost four hundred years, in Shiloh Hakeduma, Tel Shiloh, to pray together. The Bible tells of Hannah praying there for a son after many years of being barren. A son was subsequently born to her, Samuel The Prophet who led the Jewish People from the anarchy of Judges to the rule of the Davidic Monarchy.
Shiloh Hakeduma, Tel Shiloh is a well developed archeological site open to visitors on weekdays. There's lots to see and do. Phone: 02-5789122, visit@telshilo.org.il. 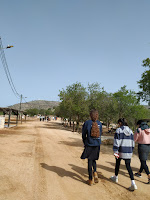 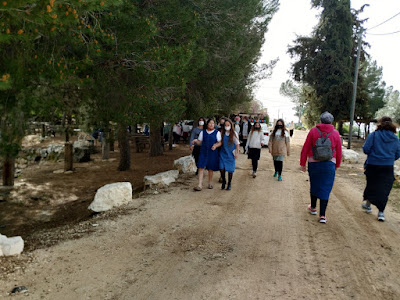 On Rosh Chodesh Nissan I was overjoyed to see students from girls high schools walking to the site of the Mishkan for festive prayers.
Posted by Batya at March 17, 2021 No comments:

That Is The Question...

After a year of COVID corona, the world seems a bit shaky.

Today in Matan listening to a Bible class, taught by Dr. Yael Ziegler, about Noach and family hesitatingly leaving the ark, we could easily relate. Even though most adults are fully vaccinated against COVID corona, we haven't yet resumed our previous level of socializing. Most of us are still pretty solitary, unless zooming, whatsapping or writing or phoning. Our tables are still pretty empty of guests, and we haven't had a Shabbat meal at neighbors for over a year.

It's hard to believe that in less than two weeks, we'll be voting in Knesset Elections. Will we be required to remove our masks so the "officials" can match our faces to our Identity Cards?

And even more important:

Will sixty plus 60+ of the resulting one hundred and twenty 120 Members of Knesset be able to come to some viable coalition agreement?

We the citizens of the State of Israel want a viable government with strong leadership to steer our precious country to security, sovereignty and good health.

I will vote for a political party that has positions, a platform and plans, not for a party that just says "NOT BIBI."  To be honest, I do feel that it's time for Bibi Netanyahu to retire. He's a few months younger than I am and I have no idea where he gets his energy. But energy or not, it's not good for a country to have the same political leader for over a decade.

I'd like to see Bibi retire with dignity and pass the baton on to the next generation. But I'm not voting for a political party which makes "replacing Bibi" the key issue to their campaign.

For the past decade plus, I've been a member of a small group of women studying the Bible. Right now we're studying Chronicles, which is about the Jewish Kings, the descendants of King David. Some are good, some are bad and some are very, very evil. It's not enough just to put on crown on someone's' head and call him "king." And just because someone wants to be prime minister and has financial backers to cover the expenses of a political party's campaign, doesn't mean he, or she, will do a good job as prime minister or even politician.

Politics is a very complex profession, and here in Israel, because a prime minister must control a coalition it's especially complicated. It can be described as playing a dozen difficult chess games simultaneously. Maybe two dozen would be more accurate.

I think it's important to vote for a party headed by a potential prime minister, unless you want Bibi and Likud to continue. As I have already said, it's time for Bibi Netanyahu to retire.

That's why I'm giving my vote to Yemina ב. Of all the wannabes, I prefer Naftali Bennett.

Bennett had a successful career before he went into politics. He has been working his way up, did a good job when Bibi have him responsibilities and has an excellent team working with him.

The Jewish Month of Nissan is rapidly approaching. Ladies, please join us for Rosh Chodesh Prayers at Tel Shiloh. 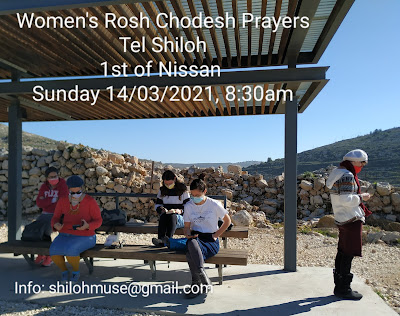 Rosh Chodesh is traditionally considered a holiday for woman, so take advantage. Come to Holy Shiloh and pray together with us.

Shiloh Hakeduma, the archeological park at Tel Shiloh is a wonderful place. There's lots to do there. If you can't come on Rosh Chodesh, visit a different time. And in case you're wondering, it is the actual location of Biblical Shiloh, a very holy place.  Call 02-5789122 or write  visit@telshilo.org.il. 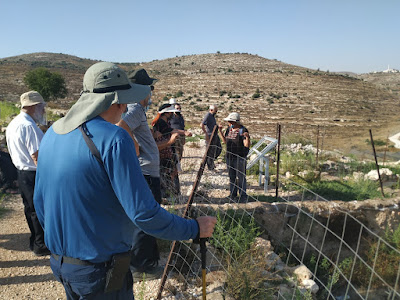 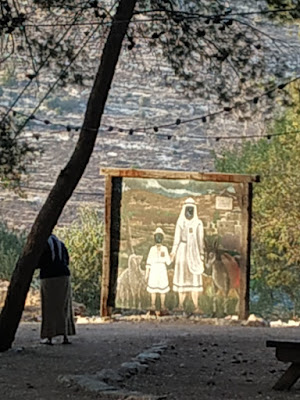 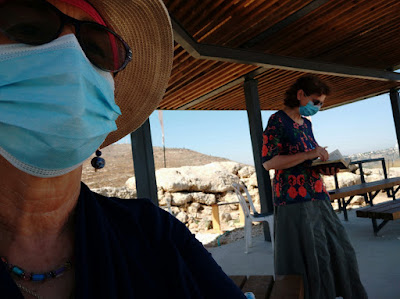