Israel Must Win This War!

Israel was attacked by Gaza-Hamas, which has been stocking up on sophisticated rockets, while pleading poverty and worse.

Israel has been continuing a dangerous cycle of getting attacked, gently and morally sic hitting back, then agreeing to a ceasefire. A few years of quiet and then the Arabs start again, with much more sophisticated weapons. And we never solve the problem. We never win.

This time WE MUST FIGHT TO WIN!

It's the only way to have peace. Forget what the world says. They hate us.

This time lots of long-range rockets from Gaza, which have plenty of and a couple from Lebanon. Next attacks will only be worse. Let's win.

Did you hear me?

re: language/word/term
I get terribly offended by the relatively new term "white privilege." Honestly, it's antisemitic.
That nasty term hides/denies how most Jewish immigrants struggled in their early decades in America.
The vast majority of Jews who moved to the United Stated in the previous two centuries were fleeing poverty. The wealthy didn't come, only the poor.
The "WASPS" didn't want them and quickly passed a quota law to keep Jews out. FDR wouldn't even fill the quota when those fleeing the Nazis tried to legally enter the United States. And if you check your history, Harry Truman didn't improve things after World War Two. Holocaust survivors had a very difficult time getting visas to live in America.
Sabbat observing Jews were discriminated against and needed new jobs weekly, or made do as independent peddlers.
It didn't help that the Great Depression was making it hard on many. The last to be hired and first to be fired were Jews.
Many Jews went to work as young as possible to help their families. Even those who graduated high school as academics ended up working, since they couldn't even afford the "free" universities.
Those using the term "White Privilege" are inventing a false history, a lie. I find the term very offensive.
Posted by Batya at May 09, 2021 8 comments:

National Unity Government Like Biblical Ketoret, Or Do You Want More Elections?

The definition of insanity is doing the same thing over and over again and expecting a different result.

Nobody's quite sure who really coined these words of wisdom, but I wish that sixty-one 61 plus Knesset Members would take the words to heart and and hammer out a workable coalition agreement for the good of the State of Israel, so we don't have to uselessly vote again. 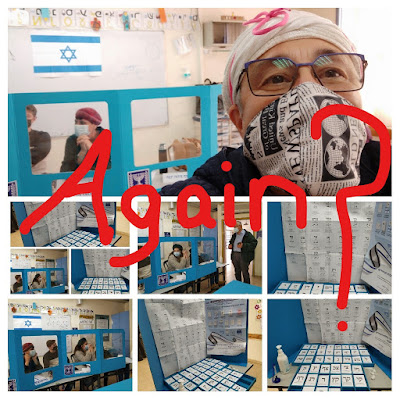 None of us are perfect, nor are our politicians. Instead of demonstrating to oust Bibi, there should be demonstrations near all the MKs' homes urging them to put away their egos and platforms. We want a viable government coalition, warts and all.

Ketoret, a specially blended incense, was used in Temple and prior to that Mishkan, Tabernacle for prayer.

The ketoret consisted of a special blend of herbs and balms whose precise ingredients and manner of preparation were commanded by G‑d to Moses.

Some of the herbs and balms were sweet, others bitter, and all were needed to properly make the Ketoret.

Right now Naftali Bennett and Yair Lapid, whose positions concerning many issues clash, but they both believe that the State of Israel needs a national unity government. One thing for sure, both have supporters/voters/MKs not all happy with the views of the "other." Think of the bitter herb that must be included in the Ketoret.

If the MKs whom Bennett and Lapid bring into this coalition from their political parties and others come with the right attitude, the State of Israel will have a good working government, like the Ketoret needed for prayer in Biblical times. Gd willing...

...because it's truly insanity to expect election results very different from what we've had the previous four times.