I had never really considered my family as being connected to the Holocaust, since all of my grandparents made it from Eastern Europe to the USA a couple of decades before World War Two.

Both of my parents were born in Brooklyn, NY, just like me. I grew up in a neighborhood built after WWII for US military veterans. Our parents spoke native New York English. We didn't hear Yiddish at home. We were American Jews. I first heard about the Holocaust when the Anna Frank Diaries was being publicized, and then there was the Eichmann Trial. None of this was connected to my family.

My father had lots of aunts, uncles and cousins on both sides in New York. My mother had siblings, no aunts, uncles or cousins. When I was older I discovered that my mother's father had been born an orphan in the Ukraine. His father had been murdered in a pogrom, before he was born, and his mother died in childbirth. He was raised by grandparents. My mother didn't know which ones, and as a young man he went to America. My mother's mother left her family in Rogotshav, Belarus for New York, when married to her first husband. They had three daughters, but he died leaving her a poor widow. A few years later, she married my grandfather, who was widowed with two sons. Together they had four more children, including my mother.

My mother was never told much about all the family left in Rogotshav. My grandmother died before my third birthday, just before my brother was born, and I already had two children by the time my mother discovered that she had had an uncle in London. By then he had passed away, but with the help of HIAS my mother and her siblings discovered cousins in London and New Zealand.

After World War Two, neither my grandmother nor her brother ever discovered or heard from any surviving relatives. So, I guess you can say that my cousins, our children and grandchildren are the only SURVIVORS of the Vishnefsky Family of Rogotshov*.

It's strange to think that it has taken me so long to realize that even though neither my parents nor grandparents suffered in concentration camps, death marches etc, we are part of the story. 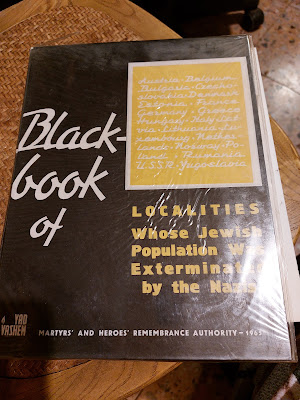 Recently I've found strange posts here. I did change my google password, but they continued, so I just deleted all the "extra" people who used to be able to blog on this blog.

I hope that helps.