No doubt you can guess that these are photos of my television screen showing the historic day when Naftali Bennett became Israel's Prime Minister. The dominant figure we see in both pictures isn't Bennett, it is former Prime Minister Binyamin Bibi Netanyahu. You can feel his fury in his eyes and body language.
Bibi showed himself to be a "sore loser." Not only did he lose the office, the political position he cherished and thought would be his for many more years, but he lost the respect of many. Unlike Shimon Peres, whose politics were at the opposite end of the political spectrum from Netanyahu, and in fact unlike all of his predecessors, Netanyahu showed no dignity, no respect for legal process. As we say in Jewish slang:

The standard custom in Israel is for the outgoing Prime Minister to publicly congratulate his successor, no matter how far apart they are politically. Afterwards he/she conducts a proper civilized traditional "handover" process in which procedural matters top secret information are passed on so that the government continues to function in an efficient manner.
Netanyahu orchestrated the most disgusting antidemocratic display in the history of the State of Israel. He and his fellow Likud MKs along with the rest of his mafia just screamed, cursed and insulted the incoming government. It was horrifying to see close to half of our Knesset Members acting like drugged/drunk juvenile delinquents.
Now here we are over a year later, and we have not heard a single apology. In a few days, we will be celebrating the second Rosh Hashanah since that unforgettably horrible scene. According to Jewish Law, a public sin demands a public apology. How anyone can vote for any of them, their parties, ever again is beyond my comprehension!
If that wasn't proof enough of their moral depravity, the opposition went on a two-pronged attack, macro and micro. The micro* comprised the targeting of various coalition MKs to harass them, taunt them and tempt them, or simply to buy them out with promises of safe spots in the Likud list in the next elections. As proof, former Yemina MKs took their seats from the coalition are now Likud candidates with guarantees to be Likud MKs.
The macro attack required the opposition to vote against all laws proposed by the government, even those which they actually favored. Anything, any political weapon to use against the Bennett government became legitimate in their eyes, no matter what the cost to ordinary Israeli citizens. With a very weakened coalition, see micro*, the so-called Right wing opposition voted against the Settlement Law endangering the security, health and more of Israeli citizens in Judea, Samaria and the Jordan Valley.

If Netanyahu had really led a Right wing government during the decade plus he had been in power, he would have declared Israeli sovereignty on these areas, and then there would have been no need for periodic renewal of the Settlement Law.

Naftali Bennett was not willing to risk harming Jews whose security, health and more required the renewal of the Settlement Law, so he stepped down from his position as Prime Minister, which necessitated new elections. According to the coalition agreement he had with Yair Lapid, if the government falls because of the actions of the sitting Prime Minister's MKs, then the other one becomes the sitting Prime Minister. Bennett who is an honorable man honored that commitment.

Why Not To Vote Likud and Its Puppet Parties 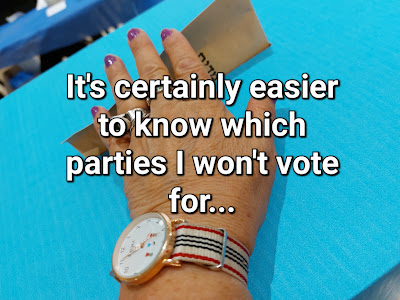 My antipathy to the Likud is very old, almost as old as the party itself, which is strange considering my Betar background and has nothing to do with today's politics, or does it?

Our aliyah, fifty-two 52 years ago this week was very connected to Menachem Begin's Herut Party and Betar, especially considering that we spent the greater part of our first year living in Maon Betar, the Betar Youth/Student Hostel, now known as the Plugat Hakotel building in Jerusalem's Old City. Like our friends from Betar, we joined, and are still members of, Kupat Cholim Leumit, and we became dues paying members of Herut, the Revisionist/Betar party. Herut joined with the Liberal Party making Gush Cherut Liberalim, aka GaHaL, which evolved into Likud.

In 1970, after over twenty years of independence, there was only one dominant party, Mapai/Labor, Leftist, secular and socialist. The National Religious Party, which besides having a few rabbis and a lot of kippot had similar policies and joined them religiously in their coalition governments and the Rabbinate. Only during the time of emergency just before the 1967 Six Days War had Menachem Begin and Gahal been invited to join the government.

Cracks in the close political partnership between Mapai/Labor and the NRP began to surface after the great miraculous 1967 Six Days War victory. The government and its agricultural monopoly chose which land to settle only according to financial export advantages probably chosen by Agrexco which was the export monopoly, the Golan for growing fruit and the warmer Jordan Valley and northern Sinai where melons and summer vegetables could be grown for export in the winter. The National Religious Party and its Bnai Akiva youth movement began pushing to return to its former kibbutzim in Gush Etzion, which had been destroyed by the Arabs in the War for Independence. In addition, there were attempts to settle Hebron and various locations in the Shomron because of their Jewish/Biblical importance. The government opposed such settlements and gave in on just a symbolic few.

Post Six Days War the IDF and government/military leaders were cocky and overconfident. The "conceptziah" was that the Arabs would never dare attack us again after our great victory, so we weren't at all prepared for the surprise attack on Yom Kippur 1973. After a few very difficult weeks and many dead, wounded and captured Israelis, Gd gave us another miraculous victory.

The Israeli electorate was shell-shocked, mourning and talked of not celebrating the upcoming Independence Day, but they voted for their usual parties, returning the veteran/traditional coalition to power in the elections soon after the war. Israelis have trouble changing political choices.

Polls had been showing more of the same for the 1977 elections, but when the votes were counted the pundits were totally shocked to discover that Menachem Begin's Likud had gotten the most votes. His longtime supporters were overjoyed expecting government support of new Jewish communities all over Judea and Samaria, besides the exiting ones in the Golan, Jordan Valley and Sinai. Instead of annexing all the land liberated in 1967 and promoting building Jewish communities all over, Begin crossed Mapai's redlines and offered Anwar Sadaat a Judenrein Sinai as a peace deal cheered on by US President Jimmy Carter. The homeless Jews from the Sinai were offered new communities in Gush Katif, and then a few decades later, another Likud Prime Minister, Ariel Sharon, destroyed Gush Katif making a new generation of Jewish pioneers homeless. As a Likud election campaign slogan stated: "Only the Likud can..."

Here we are almost a half a century later... The religious public has changed; the National Religious Party is no more, though the backroom boys keep trying to repackage and resurrect it. We began to see more and more religious MKs, who were members of other political parties, since religious Israelis had begun to see themselves as Israelis first, free to choose a political party by ideology. I see this as a maturation of Israeli society. And on the Left, today the Labor Party is an anorexic shadow of its former self barely getting the minimum votes for Knesset representation.

During the decade plus that Binyamin Bibi Netanyahu has ruled the Likud and served as Prime Minister, the chareidi political parties give Bibi their full support in exchange for the Rabbinate. Non-chareidi Torah observant Jews are blocked. This concerns, Kashrut, conversion, marriage and many other crucial issues that affect us all.

The bottom line here is that most Likud voters actually don't like this chareidi monopoly on the Rabbinate, though they support and strengthen it with their Likud vote. The Bennett-Lapid coalition gave Matan Kahane the Ministry for Religion which controls the Rabbinate. I have no doubt that most Likud voters, if they bother checking what he has been doing, really would support him much more than the chareidi control.

Very important is to consider whether or not Binyamin Netanyahu's Likud actually promotes Right wing policies. The truth is that it doesn't, and I for one am not surprised, because I heard Bibi announce that he wouldn't. At the International Jewish Bloggers Conference in 2008, Netanyahu was the guest speaker and told us of his plans for when he would be reelected Prime Minister. I was standing barely a meter from him and heard him very clearly state that:

"as Prime Minister I will be Centrist."

Netanyahu's stated reason was that he thinks that a "national leader" should have a policy in the middle. Whatever hope and loyalty to Likud that had somehow survived Begin and Sharon's destructive policies was totally wiped out by that, as far as I'm concerned. We've seen since then how when Bibi's campaigning for votes he loves the Right label, but if you look at his policies, riddled with building freezes, Jewish community and housing destruction.

Most recently we all witnessed the despicable act of ordering his MKs to vote against the Settlement Law, because Bibi and his cronies, Likud and Chareidi MKs, have only one aim-- returning to power. They don't care whom they harm or bribe (with promises of "safe" places on the Likud list) as they do it. Their only principle is preserving their power, and they want to be back in the drivers seat.

Davka, I consider the criminal investigation of Bibi to be a political witch hunt, and I think the street demonstrations telling him to resign to be antidemocratic. There's a legal political process in a democracy, and top office should never be chosen by the police or the street. We vote.

I do see a distortion/loophole that Netanyahu has exploited to preserve power, which goes against the spirit of the law, though it's technically legal. Until Naftali Bennett and Yair Lapid put together their coalition, Bibi had established a pattern of serial/perpetual power. It looked like he'd be the "interim" or  caretaker Prime Minister forever alternating with elections that didn't result in MKs who could agree on a coalition. Look carefully at what had been happening before the Bennett-Lapid agreement.

Sorry this is so long; it's the longest blog post I've written in years. I suggest clicking the links to give you more information. I welcome your questions and comments.