"Ensnared in the Wolf's Lair: Inside the 1944 Plot to Kill Hitler and the Ghost Children of His Revenge," Book Review 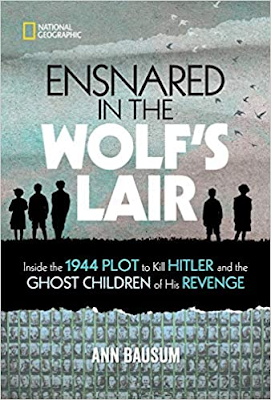 Ensnared in the Wolf's Lair: Inside the 1944 Plot to Kill Hitler and the Ghost Children of His Revenge by Ann Bausum is from National Geographic and written for older children, but I really enjoyed reading it. It is one of those books that can be appreciated by readers of all ages. It's slightly larger than standard print made reading very pleasant.
Ensnared in the Wolf's Lair tells what happened to the families, especially the children, of those who were involved in the 1944 attempt to kill Hitler.

On 20 July 1944, Claus von Stauffenberg and other conspirators attempted to assassinate Adolf Hitler, Führer of Nazi Germany, inside his Wolf's Lair field headquarters near Rastenburg, East Prussia. The name Operation Valkyrie—originally referring to part of the conspiracy—has become associated with the entire event.[1][2]
Wikipedia

To be perfectly honest, even though I had a vague idea that such a failed attack had happened, I certainly never thought about this had effected the families of the conspirators.
No one should be surprised that the children suffered greatly, separated from home, family and identity. They were only saved by the fact that the war ended not long after the assassination attempt.
We get to know some of the children well through their diaries and excellent research. I highly recommend Ensnared in the Wolf's Lair: Inside the 1944 Plot to Kill Hitler and the Ghost Children of His Revenge for readers of all ages.
Product details
Posted by Batya at April 22, 2021 2 comments: