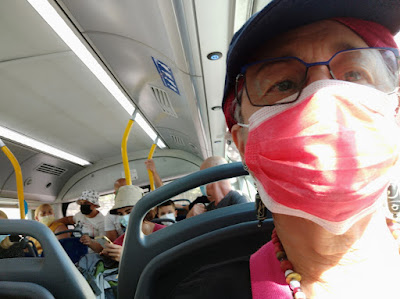 We've never had a car. As an American suburban teen, I took Drivers Ed, got my driving license, etc, but my husband didn't. I used to drive my parents' cars when needed.

We made aliyah (moved to Israel) soon after our wedding in 1970, at a time when private cars there were still very rare. In those days the roads were awful and driving culture even worse. Most drivers were "first generation," meaning the first in their families to ever drive or own a car. Having never really enjoyed driving, I was terrified to compete with them on the roads.

As years went on, I stopped renewing my American Drivers License and didn't bother with an Israeli one. We never made a lot of money, so the idea of having to budget car expenses, especially for one large enough for a family of seven, never appealed to us either. And as everyone can guess, one car wouldn't have been enough.

We've always somehow managed with public transportation. On rare occasions, we paid people to drive us, which cost less than owning a car.

Now we're senior citizens, and not only has public transportation improved, but it's half price for us. One of the really great improvements is that there are free transfers on city buses within a certain time span and the option of daily, weekly and monthly passes. You just need a RavKav bus pass. There are personal ones which automatically give us our discount and anonymous ones which can be used by anyone including tourists, but they are only full price trips.

Since we live outside of the big cities, I generally buy an unlimited day pass. For NS13, which is about $4-. If I have to go to Ariel I need to add another district, so it cost NS16- less than $5. This includes buses, lightrail and trains within the district.

Recently I heard of another way of paying which ends up less for short distances. You use an app on the phone. But since my phone doesn't have enough memory I'll have to wait until I get a new phone.

Life in Israel has its advantages for sure, especially for senior citizens.

I Do Choose What to Believe, and I Believe That COVID IS MORE DANGEROUS THAN THE VACCINE 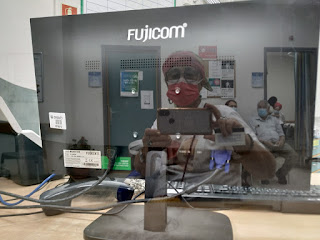 Barely a week ago, I called our healthcare provider to book an appointment for the third or booster vaccine against COVID corona. Just a couple of days later I went to a nearby clinic and was vaccinated.

Since the epidemic began, I've been following regulations/suggestions even when it meant that I wore a mask at the birthday parties for our preschool grandchildren. Except for the occasional video call, they didn't see our smiles for a year. Masks were only taken off after being vaccinated.

Even when the kids came over, I'd serve but not eat with them. 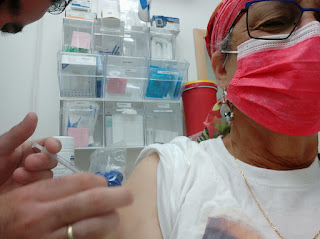 For decades I've been known as a "health food nut." My cakes and challot are made with whole-wheat flour and brown sugar. I had been a vegetarian for a quarter of a century. My kids were "deprived," since we didn't have chocolate, candy or soda in the house when they were growing up.

I rarely rushed to a doctor for prescriptions, but I never had a doubt that certain illnesses and conditions healed best, most quickly and sometimes only by taking conventional medicines. 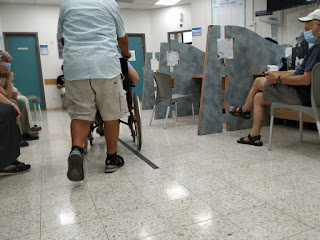 Proudly I recall standing in line with my first grade class to be vaccinated against polio during that historic time in the middle of the 20th century. Later we were given different versions of the vaccine, since it was all so experimental. None of the experts were sure which would be most effective.

Every medicine, vaccine can have a rare dangerous side-effect, but as a CPA's daughter the math is simple. The illnesses/conditions we take those medicines for are much more dangerous. That's why so much money is needed for pharmaceutical research and testing.

The polio vaccine was horrendously experimental but brilliantly effective. The Small Pox vaccine was a nightmare causing days of high fever. My two eldest children had to get it, and I'll never forget how sick it made them. But today Small Pox is history, and my younger children and grandchildren didn't require it. These deadly, crippling illnesses are now unknown.

If people would just get vaccinated against COVID corona, we'll be able to return to a more pleasant life. Periodic vaccines and boosters are a small price to pay for health.

The financial ripoff isn't conventional medicine. It's all those pyramid schemes selling "oils" and "vitamins" etc. via agent after agent. The "sales staff" invites friends to "invest" and sell and then find new suckers to join their schemes. None of these medicines/products have been through any sort of proper testing. But lots of people are getting rich and even more are losing money. And some who should have trusted their doctors are losing their health and even their lives.