McCain Sans Lieberman Would Be Better For Israel

John McCain, the US Republican Presidential front-runner is already in Israel. He has the nomination already sewn up, which gives him the leisure to travel/campaign abroad as he campaigns for the US Presidency. The Democrats, on the other hand, will be fighting tooth and well-polished nail until their party's national convention. It's a political Murphy sense of humor. The ironic first serious female candidate vs the first serious black one. If someone had written such a screenplay in the 1950's or 1960's, it would have been almost Science Fiction.

But back to McCain, who is as different from Hillary and Obama as a politician can be. 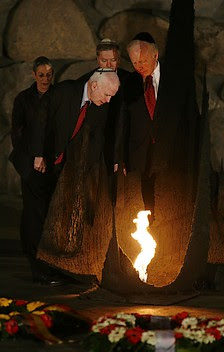 As a strong, experienced US Army veteran, I have no doubt that his gut reaction is good when it comes to Israel. My problem is more with his staff and supporters, especially Joe Lieberman, failed VP nominee, formerly Democrat, now Independent, who sounds Republican, at least most of the time. Yes, Lieberman is not only Jewish, he's the most prominent Jewish Sabbath observer in the United States. When he ran for Vice President, Al Gore proudly reminisced that he had been Lieberman's "Shabbos goy."

Lieberman is a Leftist when it comes to Israel. He supports and strong United States, which is why he likes McCain, but he's one of those in LaLa Land about the Arab danger to Israel. 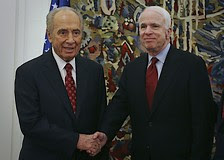 I didn't hear that. Does he have a daughter here?