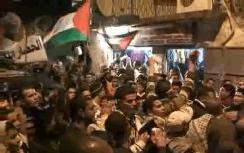 How can they be free, when a young girl is jailed for nothing!?!
Sent by mattotarim@gmail.com
Tomorrow (Wednesday), Kfar Saba:
Another court session for 18 year old imprisoned girl
In USA: Call the Embassy, ask about Tzvia!!
Tomorrow, 5 March, come to Kfar Saba to attend yet another court session for jailed Tzvia from Elon Moreh. Session begins at 9 in Bet Mishpat haShalom courthouse in Kfar Saba (a few minutes walk from Tsomet Raanana -- right next to the police station). Ask for Judge Nava Bechor's courtroom -- It is preferable to come at 8 if you want to be inside (as opposed to holding a sign outside) because the courtroom is very small. Call Dudi in the morning to make sure there is no change in the time: 052-6070116.
You may wish to bring a little sign: FREE TZVIA NOW!!

Pidion Shvuim Alert for USA Citizens re: Tzvia SarielAge: 18 Whereabouts: in Neve Tirza prison for three monthsCharge: refusing to cooperate with policeHow you can help her: Tzvia Sariel has been in prison for three months. Her crime: She refuses to cooperate with police who arrested her at a protest in her community of Elon Moreh in northern Samaria. On Feb. 27, Tzvia was brought to court where witnesses failed to identify her as the girl accused of pushing three Arabs. Still, Kfar Saba Magistrate Navah Bechor sent Tzvia back to jail until the next hearing on March 5. The treatment of Tzvia is not exceptional.. Since 2005, when the Israeli government planned the expulsion of the nearly 10,000 Jews from Gush Katif and northern Samaria, authorities drafted regulations that reserved special treatment for Jewish protesters.

When residents of Sderot blocked the Tel Aviv highway in February in anger over the government's refusal to stop Hamas missile gunners, police stood by respectfully. When Jewish residents of Judea and Samaria,protesting the government's expulsion policy, tried to do the same, they were beaten and thrown into prison.
Please telephone the Israeli Embassy at 202-364-5500 or the Israeli consulate nearest you and ask why Tzvia is still in prison. Do not argue with the embassy or consulate staffers. Instead, say that as a devout supporter of Israel, you have been defending the Jewish state from criticism by pro-Arabs who accuse Israel of violating human rights.Therefore, you are shocked to hear about Tzvia, do not understand why she is in prison and feel that she be released immediately. Stay calm, but be very clear in your message.
Please act quickly. What could be more important than winning the release of a young Jewish girl imprisoned for loving her country and people?
Posted by Batya at March 05, 2008