I know the situation is deadly serious...and yes I am still pursuing the evangelical issue - because in Eretz Yisrael physical, spiritual and existential threats are very much related. After all, Jewish continuity is - and always has been - the issue.

Let's start with American politics for some comic relief...

DUMB AND DUMBER
The possibility of a President Obama continues to be a source of real concern for a lot of folks - who will stop at nothing to try and uncover his inner Muslim. A photo of a turban-clad Obama was circulating in cyberspace and caused a bit of a stir, but the whole episode seems rather stupid considering George W. Bush has been pictured on a variety of occasions holding hands, kissing, and sword dancing with Saudi princes and their keffiyah-clad cohorts in Riyadh. (the attached is a recent one from January 15, 2008 - White House photo by Eric Draper). 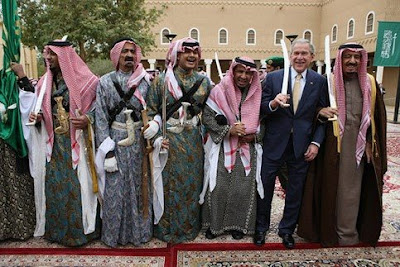 TAKING NO CHANCES
McCain is covering his bases by accepting endorsements from both friends and foes of Israel.

Former secretary of state James A. Baker III endorsed Sen. John McCain for president... calling him a "great American leader" and a "thoughtful and dedicated Republican".

The less-than -thoughtful Mr. Baker was rather explicit several years back when he uttered, "[Expletive] the Jews. They didn't vote for us anyway."
McCain reportedly admires Baker and wouldn't hesitate to dispatch him our way in order to "micromanage "Israel.

But not to fear, because - at the risk of alienating Catholic voters - John McCain graciously accepted an endorsement from Mega preacher and lover of Zion, Pastor John Hagee. McCain has been having difficulty burying a statement he made in 2000 which referred to Falwell and Robertson as "Agents of intolerance ". With Hagee in his pocket, McCain hopes to repair the damage, and assuage anxious American Zionists

But with Catholic leaders and others in an uproar, it seems McCain now has morning- after thoughts and has distanced himself a wee bit from the great white preacher man, who has referred to the Catholic church as 'The Great Whore,' an 'apostate church,' the 'anti-Christ,' and a 'false cult system.' (you don't expect me to touch this one do you?).
------

NUMBER OF ATHEISTS & AGNOSTICS ON THE RISE IN AMERICA
It seems that more and more Americans ( a significant 16%) are alienated from religion. That statistic includes atheists, agnostics, and the unaffiliated.
Could part of the dramatic rise be due to,
"The 'overreaching' of the religious right, which may have pushed too hard on issues..."?
http://www.nydailynews.com/lifestyle/2008/03/02/2008-03 02_number_of_atheists__agnostics_grows.html

AND WITH MISSILES RAINING DOWN ON ISRAEL, DOES ANY OF THIS REALLY MATTER?

The following little gem of truth comes from Jim Fletcher, a member of the executive committee of the National Christian Leadership Conference for Israel (NCLCI):

"In actual practice, I'm beginning to think that pro-Israel Christians have little impact on our government's foreign policy in the Middle East."
http://www.onenewsnow.com/Perspectives/Default.aspx?id=68031

Does the above statement imply that much of the pandering and groveling our leaders and activists do, in order to garner U.S. political support via Evangelicals, is somewhat fruitless?

MK Benny Elon doesn't seem to think so and still holds by what he told Caroline Glick in an 2003 interview:

"I believe that the power is in America...I am closely tied to Pat Robertson and Gary Bauer and others as well. and they have a lot of power."

BENNY COME HOME (AND PUT THE POWER WHERE IT BELONGS)
MK Elon is headed to Washington this week with the 12-member Knesset Christian Allies Caucus. On March 5th they plan to meet with their U.S. counterpart, the Congressional Israel Allies Caucus.
http://www.jta.org/cgi-bin/iowa/breaking/107093.html

Seeing as the average Jewish Republican has been telling me that,
"without the support of Evangelical Christians, Israel would cease to exist", I am turning to at least one Jewish Democrat who seems to have more faith in his people...

ALAN DERSHOWITZ GETS REAL:
"Israel must be prepared for the possibility of losing American support over the coming years, diplomatically, economically, militarily and morally," said Dershowitz. But Israel should not allow "these stereotypes [referring to Carter's smear campaign] to weaken its resolve but it must be prepared to go it alone."

Robert Satloff, executive director of the Washington Institute for Near East Policy, said that on a "popular level," Americans deeply support Israel. But on the "elite level," there is a "weakening" of that support.

Satloff said the only people who took Carter to task over his book were Jews. (Fourteen members of the Carter Center's advisory board resigned in protest on Jan. 11.) Twenty years ago, he said, Americans like Scoop Jackson, Jean Kirkpatrick and Dan Moynihan would have stood up against him.
[My comment: to my knowledge, those great defenders of Israel were not Evangelicals]
http://www.cnsnews.com/ViewForeignBureaus.asp?Page=/ForeignBureaus/archive/200701/INT20070123a.html

SHMUELY BOTEACH: THE QUINTESSENTIAL GALUT JEW (why make aliyah when you can send the goyim to do it for you).
(Excerpt from 2005)

"... I have long been an advocate for the Israeli government encouraging significant numbers of evangelical Christians to move to Israel and make the Holy Land their permanent home," Rabbi Shmuley Boteach told Media Transparency via email.

Rabbi Boteach, a nationally syndicated radio talk show host, the author of 15 books, and a syndicated columnist, believes that while Israel should always maintain "a sizable Jewish majority," evangelical Christian immigrants should be welcome in Israel as long as they "respect the integrity of the Jewish faith by foreswearing the proselytization of the Jewish population."

Concerned about security and the "well-being of the State of Israel," Rabbi Boteach said that "There is no better way to demonstrate this then to have a few hundred thousand evangelicals making Israel their home, and serving in the Israeli army to save the Middle East's only democracy from destruction at the hands of the many Arabs who have fought for its destruction."
http://www.mediatransparency.org/storyprinterfriendly.php?storyID=79

Shmuely asked for it...

JIJ must be busy because, according to a group of pastors who recently visited here, The Messianic community is terribly persecuted:
(EXCERPTS)
"I was a little bit surprised at the persecution of the Messianic Jews," Clary said. "And the ultra religious do persecute them, although they tolerated us, because they know we support their nation."

"They literally turn the other cheek with blood running down it," according to Blank

The men were able to visit a Messianic service but were cautious not to name names or post any photos that might give Israel's ultra-religious Jews an opportunity to target Christian Israelis.

According to Blank, there are Jewish groups who monitor media and the Internet searching for Christians who live in Israel in order to persecute them...
http://www.redding.com/news/2008/feb/24/16-north-state-pastors-go-pilgrimage

Mike Decker of Yehuda Raveh and JIJ now claims "there are hundreds of Messianic congregations..." in Israel.
http://www.israeltoday.co.il/default.aspx?tabid=182&view=item&idx=1683

The figures I come up with after reviewing stats from JIJ lawyers, media reports, US State Department reports, missionary groups, as well as counter -missionary groups in Israel are as follows:
15,000 to 20,000 ³Jewish believers in Jesus² currently residing in Israel.
That¹s up from the 7000 "Jewish converts to Christianity" in Israel which was reported in the Jerusalem Post among other sources in 2004.

REMINDER:
You can circumcise it, dump it in a mikvah, wrap it in a prayer shaul, and stamp it with an OU; but if it believes in Jesus as Lord and Savior, then it simply isn't Jewish (even if it writes you a check for a few million dollars and purportedly loves the Bible and Holy Land more than your Jewish brethren).

But it seems that my opinion, halacha, and tradition will simply not suffice, as now we have to deal with the JIJ lawyers and secular courts. So allow me to present a ruling by former Supreme Court Justice Menachem Elon (that would be Benny's father):

"In the last two thousand years of history...the Jewish people have decided that messianic Jews do not belong to the Jewish nation...and have no right to force themselves on it," he wrote, concluding that "those who believe in Jesus, are, in fact Christians."
http://www.wwrn.org/article.php?idd=21820&sec=59&con=35

I raised the alarm on the usage of the term "Judeo-Christian " almost a year ago, and used the late Rav Joseph Soloveichik's psak to defend my postion:
(Excerpts:)

Why is the Knesset of the Jewish state being used and branded as a platform to advance Judeo-Christian values?

The term "Judeo-Christian" is commonly used in reference to Western civilization and values. But Evangelicals and Messianic Jews often infuse the concept with an added spiritual dimension that amounts to a theological fusing of both faiths. And it's this blurring of lines, in combination with unchecked missionary activity, that represents serious chinks in the armor of what has been championed as the sterling and burgeoning relationship between Christians and Jews.
http://www.israelnationalnews.com/Articles/Article.aspx/7160

Although Pastor John Hagee has been meticulous and outspoken in his opposition to missionary activity in Israel, he is, nevertheless, promoting a passionate Judeo-Christian agenda heavily infused with a gospel which theologically fuses Jews and Christians together in manner which has never been sanctioned by those entrusted with protecting the Jewish faith and maintaining Israel as an independent single faith community.
http://www.jpost.com/servlet/Satellite?cid=1181813080429&pagename=JPost%2FJPArticle%2FShowFull

The stupidity of Rabbi Boteach- goyyim living in Eretz Yisrael, Christian goyyim making aliyah? He should familiarize himself with the conditions with which a goy can live in Israel. Worship of a man does not cut it for 7 mitzvot. Expel them all!

And that's the attitude that distances some Americans from the support of Israel and into the arms of the Arabs.

Christians may be nothing more than a heretical cult, an offshoot sect of Judaism, to you, but in the US Christians, especially those evangelicals you seem to despise, are the most passionately pro-Israel. That's where Israeli support lies and those people base their support on the Bible, not on the pronouncements of politicians and the media. Thus their support will not wither with the political winds.

Perhaps they don't belong in Israel. That's for Israelis to decide. However, perhaps a bit more Solomonic thought and a little less Kahane-esque speechifying would be helpful.