There seems to be a major picture-loading problem with blogger. At the blogger help site, I read a suggestion from another blogger; just upload one small picture at a time.

I'm a pragmatist. I don't see the world through rose-colored lenses. 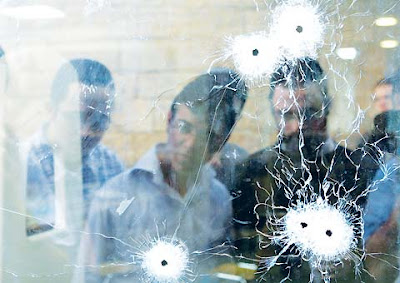 Almost twenty-five years ago someone visiting from abroad (I don't remember if it was a reporter or one of the groups to which I used to speak in Shiloh) asked me about the Arabs. I answered that I'm sure most want to live in "peace, just like me." I had no idea that at the same time my friends' son, grandson, nephew, Aharon Gross, HaYa"D, had been stabbed and then left to bleed to death in Hebron. While still alive, they hid him in a local hospital and let him bleed to death. I remember sitting in their apartment, during the week- long mourning and hearing the gory details.

I'm a "quick learner." I'm not like those Leftists who have been banging their heads against the wall, trying to "make peace" with those same Arabs, for so long that their brains have turned to mush.

My decisions and opinions are made from facts, not vague wishes and presumptions.

"Gunman?!?" I would have hoped for better from the Jerusalem Post. Of course, I don't expect much from them, but still. Can't they call him a terrorist murderer, which is exactly what he was? Even The New York Times has done better.

The terrorist was an Arab Jerusalemite with all of the identification papers needed to work in and enter every place he wished. No "security wall" would have kept him out, especially since the Israeli economy is totally dependent on Arab. Arabs, like the terrorist murder who massacred innocent students in Merkaz Harav Yeshiva, would have no problem getting work permits. 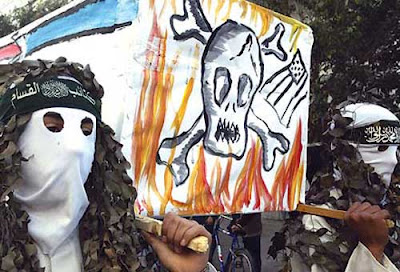 These are the same Arabs who are planning not only the destruction (G-d forbid) of the State of Israel, but they plan on taking over Europe and the United States, too. Those are their plans. Read their lips and look at their actions. 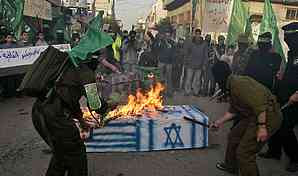 People keep telling me that such-and-such a terrorist victim was not killed, he was murdered. I have a problem with the use of the word murder for a terrorist act. To me, murder is a criminal act punishable by due process of law. Terror, OTOH, is an act of war, to be prosecuted in the field by force of arms with no mercy. If you call it murder, you are implicitly allowing the lawyers and judges into the act where they decidedly do not belong.

To use "killed" is like in a car accident, and "perished," the favorite of Yad Veshem, is like an avalanche.
I prefer "murder," since it shows that the killing was intentional and immoral.

I know that the Ten Commandmants uses "laharog," but I consider the word too mild for the hasbara we must take seriously.

The Aseret HaDibrot ("Ten Commandments") says lo tirtzach -- do not murder. I am still thinking this one over. Terror is much stronger a word than murder because it implies not merely the extinguishing of an individual human life, but also a component of psychological warfare designed to instill fear and undermine morale in the civilian populace.

Thanks for the correction.
Terror is the tool of Amalek.
Shabbat Zachor is in a couple of days...
Are they going to arrest all of us in Beit Knesset?