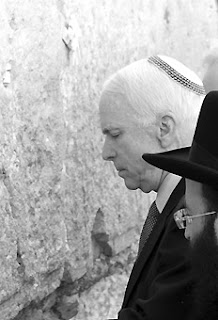 But in this case I do. Their interview with McCain is a "must read."

'Nature of enemy is hydra-headed'
McCain spells out an unequivocally pro-Israel platform in 'Post' interview.

It gives a good idea of how his mind works. The interview isn't as hard-hitting as Ruthie Blum would do, but I do find it revealing of the candidate.
He didn't come to Israel all that prepared. He seems more like a Reagan sort of guy. Good gut reactions but trusts the details to others.
McCain wasn't afraid to say that he doesn't have an answer. I think that's very important. It's better than saying the wrong thing, especially, when he only has a general policy. When I give advice to people before they're to be interviewed, I always stress that one does not have to answer every question. You can even say that it's not a good question, too theoretical, or based on a presumption, which isn't accurate.
What I found amusing was the full statement he made about Ehud Barak. There were headlines during his visit quoting his praise of Barak, so I'm going to end this by quoting exactly what is in that part of the interview:

Do you agree with the tactics Israel is using to stop the rocket fire in the south? Is the military doing what it should be doing?

I have great respect for Ehud Barak. I think he is one of the great military people I have ever seen and had the opportunity of knowing.

I can't give you a good answer as to how you respond to these rocket attacks. But I can tell you that I believe that if rocket attacks came across the border of the United States of America, that the American people would probably demand pretty vigorous actions in response. I think I know my constituency in the state of Arizona, and they would be pretty exercised if rockets came across our southern border, which will never happen, but they would demand a pretty vigorous response.

I would like to speak in the broadest terms in saying that when you look at all the factors that are at play here, when you look at the multitude of the challenges and the nature of the enemy, including a nation that is developing nuclear weapons and is dedicated to Israel's extinction, then from my standpoint Israel is probably at greater risk than perhaps it has been since 1947.

May I ask why you don't agree with the JP? I find the editorials and articles to be overwhelmingly pro-Israel and anti-terrorist.

What they define as "pro-Israel and anti-terrorist" is filled with holes in critical places.