Adar, When Everything's Upside Down

According to the Jewish Calendar, this is a leap year, and we have two months of Adar. Adar is the bridge between winter and summer. There can be snow storms, blizzards even, or days that rival the hottest and driest of summer.

Was it just a week ago Saturday night, when our local rabbi, HaRav Elchanan Ben-Nun, shocked those attending a memorial shiur (Torah lecture) about this year's Purim Meshulash (3-day) when he said that the ancient witnesses to the New Moon knew--they had instructions-- that they had to see things so that certain holidays would never fall on certain days, like Yom Kippur could never be on a Friday? The shiur was interrupted by our emergency beeper announcing the death, on Shabbat, of our oldest resident, who was over one hundred years old. And so we began the week learning about a confusing Purim and burying an elderly neighbor.

The last days of Adar Rishon, (the first of the two Adar months,) were focused on caring for his mourning daughter and planning for Adar Sheini, (the second of the two Adar months,) and a joyful Purim Holiday. Then, Thursday night everything changed. An armed terrorist infiltrated the prestigious Merkaz Harav Yeshiva, opened fire and massacred innocent students. 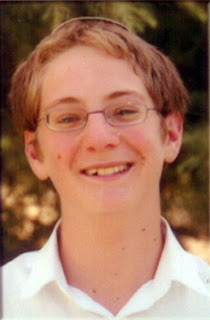 Eight students, mostly teenagers, high school boys, were murdered in cold blood. One of them was Yonatan Yitzchak Eldar, HaYa"D, 16, of Shiloh. Yonatan was born during the legendary blizzard of 1992, when snow blocked the roads here for days. His mother had to be helicoptered out to deliver him. He had just celebrated his 16th birthday, celebrating on Shabbat with his family and reading the Torah in our neighborhood synagogue.
Then, this past Thursday night, as he was fully focused on learning Gemora, the terrorist shot him dead. It took hours for his family to discover what had happened to him. They were sent from hospital to hospital, since another boy, also named Yonatan (ben Avital--people needing help or healing are prayed for in their mother's name) was seriously wounded.
It's hard to absorb, but we started and ended the week at the cemetery, two totally different funerals. The first was of a very old man, whose closet was filled with USSR military medals for his service in WWII. He and his daughter made aliyah straight to Shiloh to join her son and his family, who had then lived here. For a time they were one of our four generation clans. "Sabba Leib"'s funeral was small and silent, just before midnight, as the week began.
I had been looking forward to going to Tel Shiloh with other women, to pray for our People, so troubled and confused. I knew that there would be fewer local women than originally expected, since a baby boy had been born to neighbors just before the previous Shabbat and the Brit would, certainly be, the same time as our planned visit to the Tel. Not in a million years could I have guessed that the paralysis of mourning and shock would also be keeping women away. A few of us went to the Tel on Friday and benefited from the comfort of Chana's spirit and the eternal remnant of the ketoret. We were astounded by the beauty of the almond blossoms and warmed by the unseasonably hot sun. 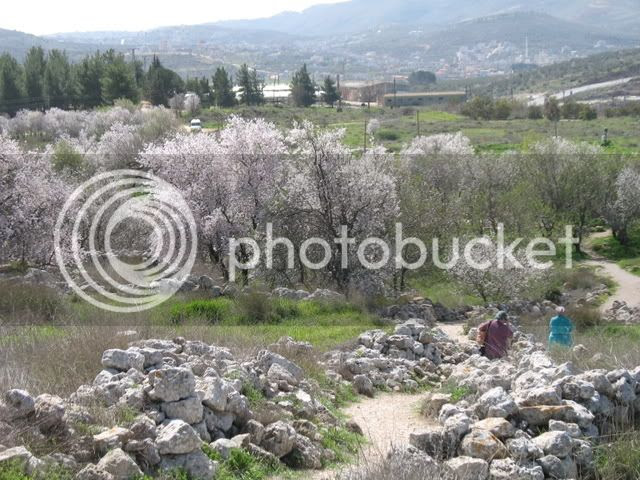 Then, just after noon, sixteen years to the day, after Yonatan's Brit Milah (circumcision ceremony,) he was buried in Shiloh, in the same row as his next door neighbor, Shmuel Yerushalmi, HaYa"D, and Noam Apter, HaYa"D, Yehuda Shoham, HaYa"D, Avi Siton, HaYa"D, Avihu Keinan, HaYa"D, and other Shiloh children who never reached adulthood.
In Shiloh we had been planning on a special joyous Shabbat to celebrate 30 years of the renewal of Jewish life in Shiloh. A festive Shabbat prayer was planned in the main Mishkan Shiloh Synagogue, but instead, the unified prayers were outside our small neighborhood synagogue as Yonatan's funeral procession began where he had celebrated his Bar Mitzvah. Together, united, we made our way to the cemetery, under the searing hot sun.
Tears flowed freely, and we held onto each other for strength and comfort. 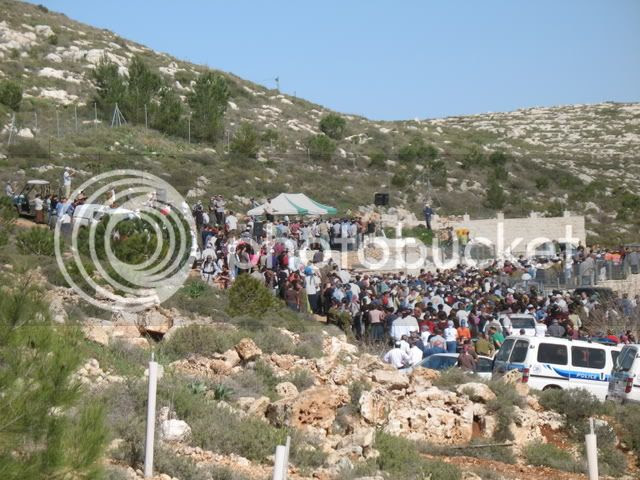 The meaning of the name "Yonatan" is "G-d gave." G-d gave the Eldar family a beautiful boy as pure as the white snow at the time of his birth, and he died as pure as he was born. Rav Elchanan spoke at the funeral of the amazingly deep and detailed questions the young teen would ask him, which he had to carefully research in order to answer. His mother begged him to use his place, now in Olam HaBa, to petition G-d to save us from the horrendous dangers we are in.
Yesterday, Shabbat afternoon, we gathered in the Mishkan Synagogue for a special talk by Rav Elchanan. The main message was not to "read things into" the terror attack as "punishment" of the Merkaz Harav Yeshiva. There are those who will say it's "punishment" for encouraging refusal to listen to the politicians during Disengagement and others will blame Rav Kook's support of Zionism, total contradictions.
An Arab terrorist from Jerusalem , with all the proper identification papers to go any place in Israel, entered the yeshiva to murder as many Jews as he could. That's the bottom line.
We must do everything to change the government, not destroy the State of Israel. Good, reliable people must take responsibility and replace those endangering us.
May it really be a Shavua Tov, a Good Week. Nahafochu, let's reverse the horror, B'Ezrat Hashem.
Posted by Batya at March 09, 2008

B"H It's difficult to look into Yonatan's eyes, but we have to.

I don't really want to go to their house today, but I have to.

So there is a Yonatan ben Avital still on the Refuah list, or was it Yonatan Yitzchak from Shiloh?

I preferred when you were posting wedding pictures.

pesky, seems that way. Did you post about the tel? It seems that it was one of the reasons for the confusion.

leora, me, too
I'd rather kill my knees dancing than by standing at the cemetery.

B"H Of course you're right. Just not my favorite thing.

I understand. We have "control" of when we "visit," but we have no control over when we become the mourners. So, when you have to choose the time, the "yetzer haraa" gets involved.

Do you happen to know how the surviving students are doing? I haven't seen any update on their conditions in a long time.

Sorry, I don't have any recent news. Bli neder I'll see what I can find out and post about it.