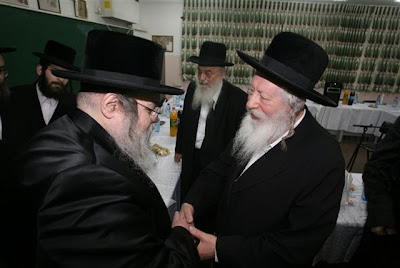 The Belzer Rebbe [L] and the Gerer Rebbe [R]

Last Thursday night, sometime after the tragedy at Yeshivat Mercaz HaRav, the Gerer Rebbe Shlita came to visit the Belzer Rebbe, to wish him Mazel Tov upon the Bar Mitzva of his grandson, which was celebrated last week. A warm, friendly conversation turned to the Beit Yisrael, one of the previous Gerer Rebbes, whose yahrzeit [anniversay of his passing] was upcoming [this past] Motzaei Shabbat. Towards the end of the conversation, the Belzer Rebbe asked the Gerer if he was going to be spending Shabbat in Yerushalayim with his Chassidim, in honor of the special Shabbat [called by Chassidim, "Shabbat yahrzeit"].
"No," he answered. "How can I spend Shabbat as usual, when eight young men were killed while at the Gemara [learning]?" (Another version has it that the Rebbe said, "How can I be responsible for thousands of people, after such an occurrence?")
It turns out that the Belzer Rebbe had not as yet known what had happened, and thus the bitter news was conveyed to him by the Gerer Rebbe.
Their conversation ended right after that.

Before we continue on with the Belzer Rebbe, let us consider what happened to the Gerer Rebbe and his Chassidim. The Shabbat following the attack at Mercaz HaRav was a very special one: Shabbat-Rosh Chodesh-Parshat Shekalim-[one of the four special Shabbatot in this Purim-Pesach season]-Chazak [the latter, completion of the Book of Exodus]. In addition, Motzaei Shabbat was the yahrzeit of the Beit Yisrael, as mentioned.
Many young Gerer Chassidim, who learn in yeshivot throughout Israel, had already come to Yerushalayim in anticipation of this special Shabbat. On Thursday afternoon, the Rebbe joined the throngs of his Chassidim for the afternoon Mincha prayers at the Gerer center in Yerushalayim.
But at night, after his meeting with the Belzer Rebbe, the Gerer Rebbe informed his attendant that was returning to Bnei Brak for Shabbat. He also cancelled the traditional visit to the Har HaZeitim [Mount of Olives] gravesite of the Beit Yisrael which was scheduled for Sunday.

After hearing the news from the Gerer Rebbe, the Belzer Rebbe stopped taking any visitors, and locked himself in his room for two full hours - to daven [pray] and say Tehillim. Thousands of Belzer Chassidim had been visiting Yerushalayim last week for the Bar Mitzva. Many of them had return flights to chutz la’aretz that night - but the Rebbe did not allow anyone to come in.
On Friday morning, the Rebbe did not attend Shacharit [morning] services with his Chassidim, and his entire schedule was altered. He attended the funeral at Mercaz HaRav, along with a large group of Belzer Chassidim.
For many years, it is a known fact that many talmidim of Yeshivat Mercaz HaRav attended the Belzer Tishes [special Shabbat meals with the Rebbe], which used to be held on Rechov Agrippas near the Yeshiva. But even now that the Tish is held in Kiryat Belz, they still come. At least one of the young men who was killed had attended the Rebbe’s Tish within the last two weeks.

The Belzer Rebbe Shlita visited Shaarei Tzedek Hospital on Sunday, to visit the young men who remain hospitalized from gunshot wounds. The Rebbe arrived with his son, and first stopped in at the Intensive Care Unit - where one young man remains in grave condition. The Rebbe sat next to the bed, and spoke with the patient’s father - giving him much needed Chizuk [encouragement] in these devastating times. The Rebbe said he would pray for the young man’s speedy recovery. In the course of the conversation, the father noted that he had learned with the Rebbe when they were boys in Tel-Aviv. 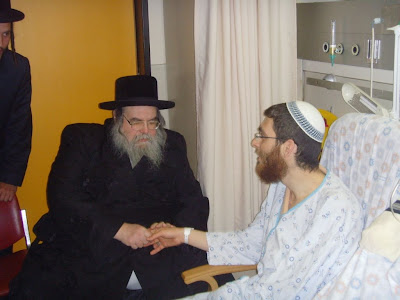 The Rebbe then went to another young man - who is recovering from his wounds - and sat with him for a while. The young man related the entire incident that transpired on that dreadful Thursday night. The Rebbe then also gave this young man words of Chizuk to help him pull through.
These are the only two young men which are still in Shaarei Tzedek Hospital - as some others were discharged that morning.
Additionally, it has been learned that there will be an evening of Hespedim [eulogies] in Yeshivat Mercaz HaRav at the end of the week of Shiva [mourning], and the Rebbe is scheduled to attend.
Posted by yitz at March 11, 2008

Yes, there is something heartening in seeing the picture of the Belzer Rebbe visiting the young man with the large white kipa sruga. Thank you for this post.

Thank you both, Batya and Leora, for your encouragement. I may have one more a bit later...stay tuned!