What Does The U.S. Have Over Bibi?

Israeli Prime Minister Binyamin Netanyahu's brutal and illogical anti-Jewish, pro-Arab building freeze to facilitate the establishment of a Pseudostinian aka Palestinian sic State in the heart of the State and Land of Israel is obviously a danger to the continued viability of the State of Israel.  Netanyahu, who for years was a spokesman against such a state and such policies.  There must be something that the American Government, its Intelligence people, have over Bibi which has forced him to change his tune.  Honestly, I don't need to know what it is.  I'd just like him to do the right thing and resign.  He fears them more than he fears G-d and his future name in history books. 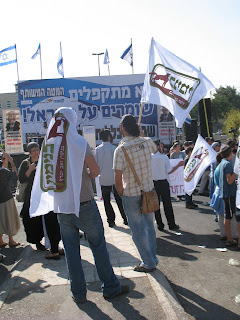 In another one of those amazing G-d planned coincidences, I had spent the morning in Jerusalem at the anti-freeze of Jewish building in Judea and Samaria and then I returned to Jerusalem for a Bible learning evening of the Matan Al haPerek program.  The subject of last night's class was "The Blessings and Curses."  Basically, you can call it G-d's "Rewards and Punishments" for how we observe the  מצות  Mitzvot, G-d given Commandments and how we treasure the Land G-d gave us.  During the demonstration, as I felt myself baking in the dangerously unseasonably dry, hot and sunny weather, it was so clear to me that we are suffering stage one of the curses for our abuse of the Land that G-d gave us.

For those of us who were old enough to understand and appreciate the miracle of Biblical proportions of the 1967 Six Days War, it's clear that by saving the State of Israel, G-d expected us to (demanded that we) immediately and enthusiastically settle the Land liberated in the war.  The Moshiach was waiting in the wings but fled when He saw that the key to the Temple Mount was given to the Moslems and the government was looking at the Sand as a way of buying peace from the Arabs.  We had peace.  G-d had given it to us with YESHA, the Golan and the Jordan Valley.

Next on my blogging schedule is a picture filled post from yesterday's anti-freeze demonstration in Jerusalem.
Posted by Batya at November 22, 2010

It's call the fear of the US making their own map and recognizing a "Palestinian State " in the UN whether we like it or not.. I don't think Bibi should resign, but he should develop a SPINE!!!

Also, someone has got to give Obama a message that he can't push Israel around.. Can't wait til he his out of office.. Hopefully the change in the congress will help things.

It must be more than that. The only one who can stop Obama is Bibi.

The threat of Israel being sanctioned etc. Either that, or Ehud Barak is threatening him in some way.This seems more like Ehud Barak/Tzipi Livni kind of behavior.

None of it's good and he's not acting as a country's leader should act.

I just think poor Bibi is one of the hords of people who have been suckered by Obama.

I sometimes wonder if Bibi's sense of identity--does he feel more Israeli or more American. From what I understand he spent a lot of time in the US growing up.

Keli, I disagree. Bibi is probably the most intelligent, educated and knowledgable PM we've ever had. I've heard him speak off the cuff on a variety of complicated issues and was impressed. When talks about this, he sounds like a robot.

I know he is very intelligent and articulate, that's why it seems like he may have been suckered by Obama.

On the other hand, he always looks like a man with a gun to his head when he meets with Obama. Before Obama came along Bibi always appeared relaxed and is probably the most popular and well-known Israeli PM in the US.

I honestly don't know what Obama is holding over his head, or why but I do agree that this isn't the Bibi I am used to seeing on TV.

Either he is being suckered by Obama or my husband's theory is right. Yaakov had to "trick" Lavan back in order to get what he wanted from Lavan.. Hopefully it's along those lines.. I don't think Bibi is that dumb. The "PA" is getting sicker by the day.. That "study" about the Kotel not belonging to the Jews was totally horrific.They are playing their own games, so it would seem that Bibi has to play his .

cm3, of course I can't prove anything. I just go by my kishkes, like many of us. I just hope I'm wrong.

I hope to G-d Bibi isn't that stupid, as one of your commenters remarked. I always thought of him as a man of intelligence, and somewhat of a statesman.

Perhaps he is just stringing Obama along? Perhaps (I want to believe this) he is stalling for time--and that there is an underlying strategy to all this?

I have not been following the news too well lately (only that which I hear on NPR's Morning Edition as I'm waking up) so I don't know if there is any update on the new 'freeze.' Is there?

I definitely agree with you, that the Six Day War was a miraculous victory. We had the opportunity then--the world would not have uttered a peep, after having seen the Jewish People rally from a massive planned attack by seven Arab nations--to annex all the captured "territories" into Israel proper. And we didn't.

That war's outcome--just as the founding of the State of Israel after 2,000 years, right after the Sho'ah--was a miracle. And we blew it.

How many chances will we get...?

He's not stringing anybody but himself, and it looks like a noose to me. Have you looked at his expressions and body language?
(I've said this before...) Bibi is probably the most intelligent and well educated PM we've ever had. I've heard him speak off the cuff about difficult subjects. He sounds like he's being held at gunpoint.

I can't (or don't want to) believe that. Love you, but hope you're wrong!

What else makes sense?

Nothing in this world makes any sense. Why should this be an exception?

I've brought logic to it, I just don't know the actual issue they have over him.