Out Of Context, Partial Statements, Can Be Misunderstood

A favorite movie of my lawyer daughter is "My Cousin Vinny."  It's a comedy based on a joke showing how incorrect punctuation can turn a shocked question into a factual statement which is then taken by the police as a confession:

The previous line said in a incredulously, surprised, shocked tone was considered a factual confession by the police.  This is related to the cases when rapists claim they heard:

The cropped part of the sign below could be an Apease aka Peace sic Now sign, since all it says is:

I'm rather "disabled" when it comes to my Hebrew reading, so I read the bare minimum.  When I first noticed the sign, I was upset.  Why should building here be a danger?  It's good to build.  We need more homes for Jews in Shiloh. 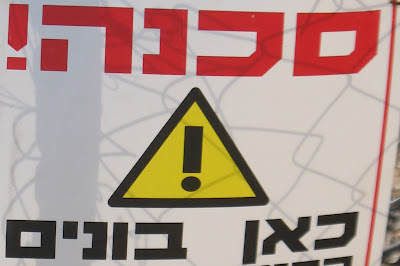 Then I took a better look at the sign.  It's for safety, from the contractor for insurance purposes. It says that "strangers," meaning those who aren't part of the building crew, are forbidden entrance to the building site.  And it requires the building crew to be properly equipped with safety helmets. 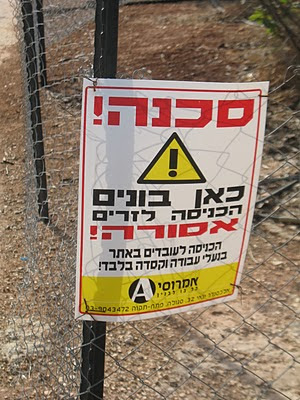 So many times we come to conclusions without knowing all the facts.

That's one of the reasons I keep blogging about the different goals re: the "talks" that the Americans are pushing Israel to participate in.  The Israelis who are in favor of the "talks" want them, because they believe that the aim is "peace."  But very dangerously they haven't been paying attention to what Obama and the Arabs have stated as their goal.  Their aim isn't peace.  They intend to establish a Pseudostinian aka Palestinian sic State.  They want it to be strong, independent and viable.  Israel's further exisitence is not a priority for them.  That's the truth.

Obama's plan for the next stage of "negotiations" is to decide the borders.  He keeps saying it, over and over.  There are those who claim that Bibi is trying to "string Obama along," but he's doing the opposite with his freeze of Jewish building in Judea and Samaria.  He's rushing the "talks," not slowing them down.

The best thing would be for Israeli Prime Minister Binyamin Netanyahu to do would be to refuse to participate.  Let the Americans stew and fume.  They'll get over it once they see that we can't be moved.
Posted by Batya at November 25, 2010