I've known for too long that we can't trust Binyamin Netanyahu.  No, I haven't heard anything about Olmert-like crooked deals.  I'm talking about trusting the man who is my Prime Minister to be strong in face of pressure.  Hillary Clinton and crew broke him much too easily.  He came back from the states backtracking on his promises to the Israeli Nation.  He was given the assignment by Hillary to reimpose a building freeze, unilateral-for Jews only, in our historic homeland, Judea and Samaria.

Early on in Netanyahu's first try at being Israeli Prime Minister, I spoke to the late David Bar Illan about his leaving his post as Executive Editor of the Jerusalem Post and working as a special advisor.


"Are you sure you can trust Bibi to do the Right thing?"  I asked David.
"If he doesn't, I'll leave," was Bar Illan's reply. 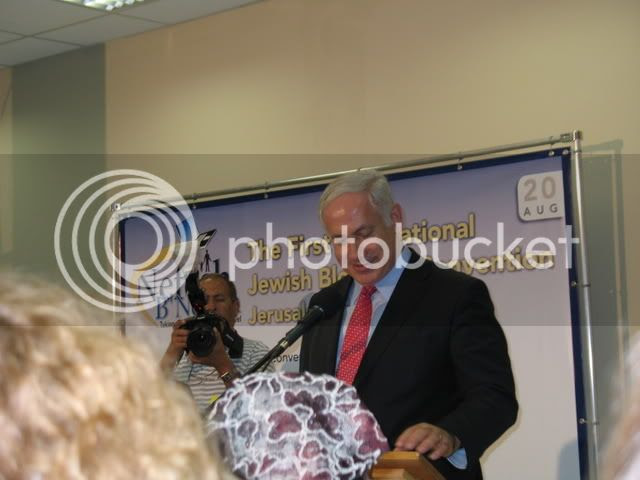 A couple of years ago,  when Netayahu spoke at the First (of just two-will there be more?) International Jewish Bloggers Conference, I no longer had any doubts about Bibi. I knew that he wouldn't be leading us the Right way. His aim was to be accepted as a "centrist," and he was willing to ignore his knowledge and sacrifice whatever ideals he had.

Another think is that I don't pay attention to politicians' speeches.  Those fancy speeches aren't real policies.  They are just words, usually written by a talented staff of professionals to promote a message, an impression.  I'm only interested in actions.

Bibi, like his predecessors, wants to be liked, especially by the movers and shakers of the United States.  He craves approval, and will do anything to get it.

And if you're wondering why we've been suffering from a drought, insufficient rain?  It's simple, all written in the Bible.  G-d told us that if we keep His Laws there will be blessed rain in the right quantities and the right times, but if we ignore G-d's commandments, the rain won't fall.  If you watch the news and here what our politicians are saying, you don't have to watch the weather report.  You know it'll be too dry here.
Posted by Batya at November 14, 2010

Why anyone trusted Bibi Netanyahu to do the right thing is mind boggling. This is the man who gave up so much his first time as PM. Why would anyone trust him. As a conservative Orthodox Jew it pains me to say the most harm that has come to Israel is from Likud.

So true and it started with Begin. When Menachem Begin gave Sadat the Sinai, I knew that I could never support the Likud. Shamir didn't leave Madrid when Rachalla Druk and Yitzchak Rofeh were murdered. Bibi's first term was bad for Jewish control of the Land of Israel. Then Sharon and Olmert turned Gush Katif into an Arab terrorist haven.
Now Bibi's even worse...
We must repent!