The War that No One Won? 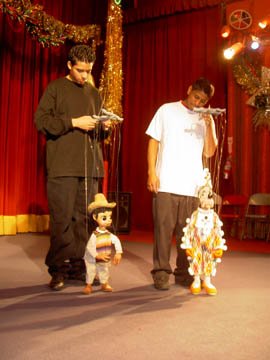 I've been calling this recent war The "Spin" War, with the horrid feeling that we lost it, so I was surprised when someone I really respect sent me and article by Amir Taheri which says that Hezbollah Didn't Win. So, maybe my title is the correct one.

Nothing is very clear here. Neither Hezbollah nor Israel got what it wanted. But is that the entire story? I doubt it.

I think we have to go a little deeper. The war that played in the headlines was just the tip of the iceberg, as the saying goes. Or would a better metaphor be a "puppet theater?" Who was behind the scenes, pulling the strings and controlling the actions and reactions?

Someone or some country got what it wanted. I can feel it in my kishkes (gut.)

The question is who.

Just like I tell my students when they're faced with a difficult "multiple choice question." First let's try the process of elimination. But here it's harder than than an English exam.

And suddenly, the unthinkable, Northern Israel, Haifa, Nahariya, Tfat and more cities and countryside, were all being bombed by Hezbollah, the terrorists who are well-entrenched in Southern Lebanon! And Defense Minister Peretz was surprised. He hadn't a clue as to what had been going on there ever since his fellow Laborite, Ehud Barak had ordered the IDF to flee from there six years ago.

The Israeli defense experts had been preaching for years that our "superior fighting power" would keep us safe. The Arabs "wouldn't dare" risk defeat. Deterrence would protect us. This may have sounded great in the cabinet room or at the well-paid lectures government officials, past and present, gave, but it's no secret that it didn't work this summer.

For Deterrence to be effective, the other side must believe that they would suffer so, it really wouldn't be worth the risk. And since Olmert had said he was "tired..."

Most Israelis really didn't have any idea of how well armed Hezbollah was before the attacks began this summer, but the United States was very aware of what was happening behind the scenes in terms of weapon supplies and more. Look at this time line.

I was in the states during some of the war, so my perspective comes partially from the TV news I watched there. There was a well-choreographed "dance" between Olmert and Bush to reach a cease-fire, which would bring foreign troops to "guard" Israel.

Of course, the United Nations' concept of "guarding" Israel has never been for Israel's benefit. Israel is constantly being "chastised" for defending itself and when attacked, the aggressors are left alone. The agreement doesn't even include a clause conditioning the cease-fire to be after the release of the kidnapped Israeli soldiers, even though Olmert kept claiming that he had sent the troops into Lebanon to free them.

And isn't it a strange little coincidence that the very person being proposed as "savior of the nation" has been a Distinguished Military Fellow at the Washington Institute Center for Near East Studies? That's Moshe Ya'alon, if you didn't know.

I, also,can't ignore the fact that Jonathan Jay Pollard has been in American prisons for over twenty years for the "crime" of giving security information to an ally with which the American Government had a treaty promising the information. There is no legal precedent for so severe punishment for such a crime.

It bothers me that so many people believe the myth that "America has always been a friend of Israel." How can one believe it when America didn't even plan on voting for the establishment of the state in the infant United Nations? Harry Truman's old friend and business partner had to be urged to personally lobby for Truman's support.

I have no doubt that most of the truth is hidden, and we can't believe what the politicians and media keep telling us. Remember there is still a war going on, and it's far from over.

Partner be damned. He decided to vote positive when Stalin announced he would, to avoid being flanked on the left. And it was the last American "help" until after 6/67.

There are three reasons why America "helps" Israel, and "friendship" has nothing to do with it.

Every dime in military aid is a direct subsidy to the Aircraft industry.

Every blackhawk flown by Israelis on the nightly news is foreign orders for more (HOW many F-15's does Saudi Arabia have, in that airbase where they promised they'd never station them?), no American lives at risk, and fewer orders for our competitors in arms dealing.

Every plane they get from us is American control over Israeli operations, either contractually, or by holding back planes, munitions, spare parts.

I called it the War of Dire Straits.