Voices, Words from Ordinary People During the War aka Operation Protective Edge

All of the politicians and military men have their staffs, their secretaries and public relations people. They also have the "ear" of the media which is always willing to give them the microphone. Ordinary people on Israel's front-line, those who live in the areas which the Gazans have targeted don't have too many ways to get their messages out, their feelings.

Here are the words of some of my friends:


a quiet night B"H - may it stay that way. Shabbat ShalomI live in Bet Shemesh proper, among the Hebrew-speaking population. My neighborhood looks out over Mateh Ye-uda region (basically a tundra), which catches some mighty whomps and has uninterrupted views of the night sky. I can feel the vibrations of sirens when my hands touch walls as I sleep. Windows and sliding glass door panels rattle in the frames. We see the missiles arcing rather well from down here. RBS residents might as well live in a far-off land; they do not experience what we physically feel or see. People in my part of town seem to be having a range of normal reactions to the commotion: panic, calm, tendencies to pray with/without formal text. The sweet aspect of it all is the heightened politeness, courtesy, and thoughtfulness going on. Strangers hoist groceries for each other, give loose change to people with insufficient funds stuck at the check-out registers, give tremps so that nobody will suffer the fear of waiting for dangerous rides, speak divrei hizuk just cuz, and other niceties. I can clearly see Shechem out of my window and I have nothing to report, baruch HaShem. Food for thought.My grandson, who has been in Aza all week, came back to our side of the fence for a few minutes for something to be repaired and promptly borrowed a phone and called his mother. Baruch Hashem he is fine!

This post on me-ander, Guest Post: SHOPPING DURING THE WAR by Janet Clare, gives another aspect of life here in Israel during the war.

All I hear is that people want to finish with Hamas. And finish means destroying the Arab terrorists.

It's amazing how generous people are in their donations to the soldiers. Pretty much every store or shopping area has a basket for donations.

Here's the list of wounded soldiers who are in need of our prayers. 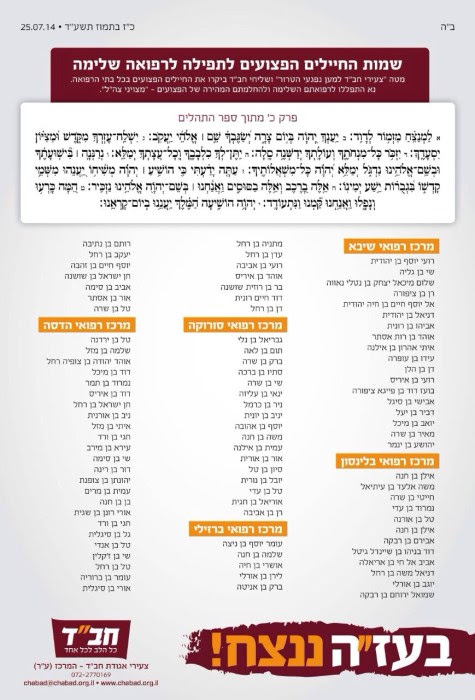 May the Good Lord keep them and all Am Yisrael safe. If necessary He should perform His miracles, even if it makes it look like this is a "disproportionate war," because more Arabs die than Jews.
Posted by Batya at July 25, 2014

The IDF must use disproportionate force. Most of the world hates Israel to begin with so who cares if they're critical about what a nation must do to survive?

" May He exact retribution for the shed blood of his servants, wreak vengeance on His foes and make clean His people’s land.”