Davka This Year, They had Planned on Coming to Israel 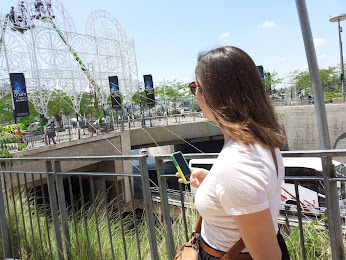 For a number of my cousins, this is or was? the year for their first trip to Israel. One cousin was lucky to have brought two of her kids for their very first visit when her nephew, their cousin, got married before "all of this" started.  And the daughter of a different cousin has been here for over a month on a work-internship program and spent time in Jerusalem before the program started. She's, davka, based in Tel Aviv, but last week was told that to visit my daughter in Ofra she needed for someone to pick her up in Jerusalem as if the bulletproof Egged buses are less safe than an ordinary private car. But for plenty of other cousins, including her parents, this summer is the summer trip to Israel they had been dreaming of for years or longer.

Nobody is sure if they're coming.

I guess that if I was living on Long Island or some other part of America or Europe, Australia etc coming to a "war zone" would seem dangerously foolish. We all know that Israel is a small country, so you'd expect a missile landing in Ashdod to do damage or at least vibrate in Shiloh, nu?  But in all honesty, in times of war the distance from one end of town, or one side of the street to another or even from the kitchen to the computer room may seem like a million miles.

I don't envy those who have the responsibilities for tourists groups today.


As a result, leaders of high school trips are changing itineraries to keep participants out of missile range and increasing contact with parents to preempt undue worry. Instead of taking kids to the Western Wall in Jerusalem or the beach in Tel Aviv – stops typically at the core of the Israel teen tour itinerary – trips are headed for northern cities like Safed or taking hikes in sparsely populated areas.
Trip directors are coordinating with Israel’s Education Ministry, which sends out daily guidelines about which sites are off-limits. Trip directors say they plan to return to Jerusalem and Tel Aviv if the conflict ends before the trips do.
A group from Cleveland on a 10-day Taglit-Birthright Israel trip replaced its night out in Tel Aviv with unplanned stops further north.

I wouldn't want to be in their shoes. Taking all into account, I'd suggest they add places like Shiloh Hakeduma, Tel Shiloh to their itineraries. This is the time to discover Northern Binyamin, the Shomron and Jordan Valley, which are the safest areas in the country and full of gorgeous Biblical and tourist spots.


Just to remind you that I'm not naive and untouched when it comes to Arab terror. I'll never forget my reaction after surviving an Arab terror attack only mildly injured. I felt safer. I felt that G-d wanted me to survive, and if G-d had wanted me to die nothing in my power could have stopped it. This did not make me act foolishly or suicidal, but in the almost twenty years since then I've felt a combined confidence and fatalism. Don't ignore the dangers, but don't blame the victims either.

We will have peace and safety when our Arab enemies are defeated both militarily, spiritually and psychologically. That's why I oppose all of the humanitarian aid to our enemies. And that's why I oppose trying to reduce enemy casualties. It just makes them emotionally and spiritually stronger...

Back to the topic:
Can I promise anyone safety and health? No! My late mother used to love to say that "more people die in the bathroom than visiting Israel."

I pray that the Arab Hamas Gazan terrorists will surrender, and we'll have peace and quiet, but I don't know when that will be. I sincerely hope and pray that not only will all my cousins who have trips planned to Israel do come but they aren't sorry that they did.