Take Off Your Leftist Tinted Glasses

It's sad, no tragic that too many people refuse to accept the truth, even when it's not only staring them in the eyes but exploding right in front of them. That is the situation of the Israeli Left. You'd think that the Gazan launched rockets, missiles weapons falling in Tel Aviv would do the wake-up trick pretty effectively, but they still subscribe to their fantasy of "if Israel would just ... then I have no doubt that the Arabs would be peaceful." sic.

I keep hearing this on the Israeli media. So-called experts refuse to read the writing on the wall or listen to the sirens and explosions all around them.


Even worse is the fact that the Israeli media gives our enemies the chance to tell their side of the story, as if this is a simple debate about who should get the larger piece of chocolate cake.

Time after time I keep hearing the so-called "experts" saying that peace depends on Israeli concessions, that even after decades of our being forced to defend ourselves from constant Arab terrorist aggression, attacks, we can achieve peace "if only..."

This fairy tale must stop. There will be war between the Arab terrorists and Israel until there is a major change in Arab thinking.

A Gazan "Marshall Plan" will not make for a rehabilitated peaceful Gaza. Just like they have done in the past, they will use the cement, not for schools, hospitals and shelters, but to make bunkers and tunnels to attack Israel.

Truth may hurt the ego, but that's nothing compared to the price of the Gazan Arab terrorist attacks, whether they land in Israel or misfire and kill Gazan Arabs.


As many as 25 percent of Hamas rocket attacks against Israel in the current Israel-Hamas war don’t make it out of Gaza and strike civilians inside the coastal enclave, Algemeiner Editor Dovid Efune asserted in an interview on Real News TV on Friday.
Asked about an explosion at a UN school on Thursday, which killed at least 15, according to Gazan reports, Efune pointed to the IDF’s claim that the source of the munition may have been Hamas.
Efune said, “This is really a watershed moment, which brings up a fundamental issue which is never discussed in the mainstream media and that is this: you have hundreds and thousands of rockets that are being shot out of Gaza. In our estimations, at least 25 percent of those rockets do not make it into Israel and fall short into Gaza.” (Algeneimer) 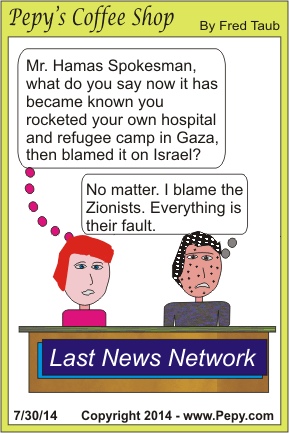 >> There will be war between the Arab terrorists and Israel until there is a major change in Arab thinking.

This is an extremely important point.

One major sign of such a change - although you can't specify this, as if you were writing an articficial intelligence progam - is that they stop saying that Israel started this.

Whatever other lies they tell, they always say this.

And I don't think any satisfactory arrangement can be worked out, until there is an end to Arab self-righteousness, or the pretence of it. Naturally, all those condemnations of Israel don't help that process of repentence along.

The world wants to ignore blame, but without assigning blame, and assigning it correctly, and having both sides agree on who is to blame and who is more prone to violence, nothing can happen.

This matter cannot be shoved under the rug.

A lot of the Israeli Left simply want to place Gaza's Arabs under the rule of more corrupt terrorists.

They're not doing the Arabs or Israel any favors by pretending that Fatah is a model of rectitude.

But too many people in Israel persist in the fantasy, that if only the Jews are nice enough, the Arabs will understand why they are there.

Evil cannot be treated with ice cream. It can only be destroyed! That is the only outcome that will produce lasting peace.

Batya, Hashem sees all. No matter what, we are getting closer and cloaser to an end to evil (Please Hashem, it's not coming quickly enough.)
Each side is placing a check in the box of their position.....how sad that their are those who truly oppose peace by helping the enemy...

Amen to all of you.