Yes, I've written about it many times. I am a terror attack survivor.

Almost twenty years ago, when I was waiting for a bus or ride, whichever would come first, an Arab terrorist rammed into me and over twenty other people. He killed one and wounded many. I was the lightest injured of the injured.

Honestly, what hurt the most was the fact that the police first tried to claim that it was an accident.  Just like I heard on the news today. Today an Arab terrorist took advantage of the fact that there were people waiting on a roadside for a ride, outside of the protective barriers, in my case there weren't any protective barriers, and he quickly turned, rammed into the them and fled. 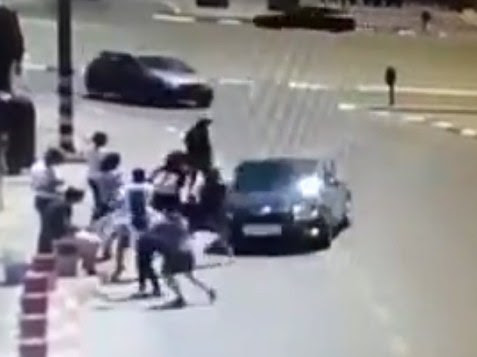 A young woman was injured.

In my day there were no easy to use digital cameras to record the attack, but I have no doubt it was similar but worse.

Refuah Shleimah to the injured and Shabbat Shalom

80% of Muslims in Europe living on welfare:
www.youtube.com/watch?v=kPWcOhWDtOQ

Who Are the Palestinians? by David Margolis
www.myjewishlearning.com/israel/Contemporary_Life/Israeli-Palestinian_Relations/The_Palestinians.shtml

Who Are the Palestinians? by CAMERA
www.camera.org/index.asp?x_context=7&x_article=1028

How are you doing, Batya? News reports like this must bring back bad memories. Hope you're doing well.

Keli, when will we ever learn?