When did I become a rat? Yes, a rat hiding in a sewer pipe. I am finding that I don't want to wander far from the nearby sewer pipe bomb shelter and that regardless of day or night, I now putter around inside, waiting to hear the warning siren to make a run for it. And when I hear it, I call out "go! - everybody to the sewer!"

This past Friday we heard and felt booms landing in Ashkelon (10 min away). The siren blare gives us 30 seconds to get into the sewer pipe bomb shelter. I've suggested to my neighbors that we have a bomb shelter contest for whoever gets in first. Of course they pointed out that it's already rigged on account my caravilla is the closest. One neighbor told me that a laptop will work in it - good to know. At night several family members "sleep" fully clothed including shoes - ready to make a run for it.

One of my younger daughters is particularly upset that we refuse to take the dogs into the shelter. Though we've explained and explained -she loves them and worries about them so (as do we). The dogs aren't showing any signs of trauma.

And I have cabin fever. I don't walk far from my sewer pipe bomb shelter. There aren't any bomb shelters set up at the small local shopping area, the health clinic, or Neve Dekalim beit knesset (synagogue). One thinks twice before venturing out. Nobody ever said the life of a rodent is an easy one.

My family has received a number of generous hospitality invitations offering us a reprieve from the bombing. "There's no place like home," my family insists refusing to leave the caravilla. Most of my neighbors are spending Shabbat (Sabbath) elsewhere.

The army ground force command announced that Shabbat (Sabbath) prayers are to be held in concrete buildings. No gatherings larger than 100 or 300 people - depending on kill-ometer distance from Gaza. Here at the temporary Nitzan caravilla site that only leaves the sewage pipes. When did we morph into rats?

Today my husband and I walked up to the permanent housing site of Neve Dekalim- Nitzan. How wonderful it felt to be outdoors in the warm, fresh air; near orange groves and the nature reserve. Our house is in the building process having its outside walls, bomb shelter, and poured roof completed.

We made haste to our newly built bomb shelter when the siren sounded, twice. 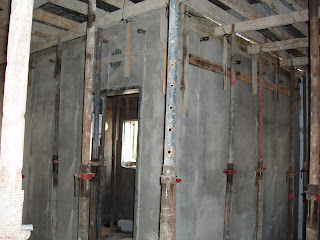 and not in the caravilla sewer pipe bomb shelter. 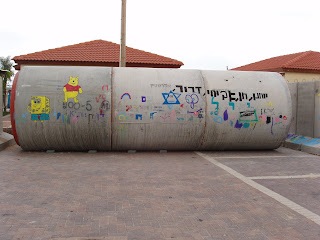 Several people were wounded and two girls suffered psychological trauma in Ashdod , may they have a speedy and complete recovery. Buildings and a park damaged by rockets in Ashkelon.


Motzei Shabbat, about an hour after the Sabbath departed, the siren blared. My family was in the sewer pipe bomb shelter in record time. We heard and felt nine booms. We pray that there aren't injuries.

Sara, when you lived in Neve Dekalim and the Arabs launched missiles at you, did you run to shelters like you are now?

Any time you'd like to visit, you're welcome here.

Sara, thanks for this first-hand account. wishing you and your neighbors a good and safe week (or weeks - whatever it takes) and the same for the other Jews in southern Israel, in fact in all of Israel. wishing success to the IDF soldiers in the ground offensive, may they all return safely after eliminating the terrorists and all their weapons.

Batya, thanks for the open invitation -
it will be Plan C!

Batya,no we didn't.
Let me point out:
(1)the Arabs launched mortars at us in Neve Dekalim and not Grad rockets.The mortars damaged property,shrapnel pieces lodged into people, maimed, and killed.

(2)we lived in concrete houses, a number of which had reinforced roofs after Tiferet Tretner HY"D was killed by a mortar smashing through the roof of her Neve Dekalim cement-made house.The caravillas are flimsy and cannot withstand a rocket hit.

(3) Neve Dekalim announcements instructing us to "get into protective areas" came AFTER the mortar hit. The siren of today sounds BEFORE the Grad rocket hits giving us 30 seconds to run into protective shelter.

Leah, thank you for your warm thoughts and support.

BS'D
Sara Layah, you know you and your family (dogs included) are welcome by us. You are in our thoughts constantly. We wish you and all Yidden in Israel (and elsewhere) safety and well-being. I'm going with friends tomorrow to the Holocaust center in Miami tomorrow for a huge showing of support for Israel. We care.

Sara, thanks for the clarification. I guess the plus of living in a cardboard home is that the walls and ceilings aren't heavy enough to seriously injure anyone.

Not to make light of the situation, as an owner of this wonderful pet, there is a lot to be said about the intelligence and tenacity of the rat.

Shalom!
Batya, in Gush Katif houses had a "safe area" and caravans were supplied with an attached "safe room" - not a nearby sewer pipe. As Sara said, in the Gush we weren't faced with Katushas or Grads. Had the Arabs been launching Grads we probably would have been instructed to enter shelters.
Sara, correct me if I'm wrong, but Tiferet Tretner, hy"d, was sitting under the section of the ceiling that was the drywall section that was designed to be removed to allow for a staircase to be easily built.
Keep safe. I suppose I should have known that if the government didn't come to its sense soon that I'd be safer here in Elon Moreh than in Ashkelon (our last place of residence) - and much safer than in a cardboard box.
You and your dogs (outside) are welcome here too.
Hadassa DeYoung, K'far Darom/Elon Moreh

Hadassah, I think you're correct in that (1) the mortar smashed into her house from the roof's drywall area and (2)Tiferet Tretner HY"D was seated (in)directly under this weak spot in the roof. But does this matter?? Mortars smashed through a number of solid concrete roofs injuring residents.

Thanks for the invite!

Sara, Shalom!
I guess it depended on the concrete roof. In my neck of the woods they were mortar-proof or at least highly protective.
Hadassa

It's March 2012 - and expellees at the Nitzan caravilla site are still forced to use gov't issued sewer pipes for protection from incoming rockets.
Pictured here in this March 13, 2012 Jerusalem Post article,"Emotional crisis hotline reports 150% rise in calls"
http://www.jpost.com/NationalNews/Article.aspx?id=261635