Ruthie Blum Leibowitz got it 100% right, plus extra credit, in her media article about the media's infatuation with Barack Hussein Obama. 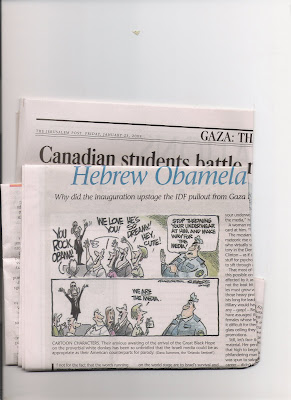 Ironically, during the campaign bloggers and mainstream journalists who stressed Obama's middle name were attacked for using underhand tactics to ruin his image, but when it came to his Inauguration as U.S. President, he, himself, used that very Arab/Moslem middle name. As a kid, even in Indonesia, he was known as "Barry," but at some point he began to use his full, non-white sounding, name, Barack Hussein Obama.

Unlike many Afro-Americans who changed their American-sounding names to Arab ones when they became Moslems, like Cassius Clay becoming Mohamed Ali, Obama was given his name at birth, as "junior," named after his Kenyan father. 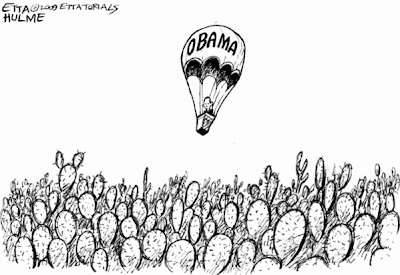 Americans are in for a rough ride. Bush was booed at the Inauguration, something that bodes danger for the American public.

It is not going to be easy for Obama to please his fans, and they're not the subtle polite types.

Israel should send , George Mitchell, his emissary back home. Obama will soon be so embroiled in own domestic problems that he won't have time for us if we're firm.

The timing of this visit is a blatant interference in Israeli Elections, and G-d willing it will totally backfire on Kadima, Labor and Obama. How it will affect the Likud depends on how Bibi Netanyahu welcomes Mitchell. If he tells him to get lost, then he'll benefit, but if he tries to negotiate with him, then the Likud will suffer, because it'll show that push comes to shove, the Likud is no different from Kadima.

Obama is a "miserable failure"
I must admit that this is sweet revenge. A few years ago tech savvy internet users with Bush derangement syndrome linked President Bushes bio with the Google search term "miserable failure." Now the label has been transferred to President Barack Obama.

All that google stuff is just a game, but my gut feeling has been that his supporters have unrealistic expectations and an impuslivity problem.
Good Luck America

At the end of your article you mentioned Bibi and Mitchell, while they havent arrived yet Bibi has already made clear he wants a Leftist Kadima and/or Labor aligned government.

That's another reason not to vote Likud. The few right-wing MK's they'll have won't have any influence. Bibi is determined to show that he's "centrist."

I can't believe some people are STILL stuck on President Obama's middle name. GET OVER IT!

It's stupid xenophobic paranoia at its worst. EVERY PRESIDENT has used his middle name when being inaugurated. It would suggest that he is somehow ashamed of using his middle name for the exact reason sensationalist fox-news watchers are stuck on this issue. The same reason the RNC was pushing Bill Ayers instead of focusing on the economy. Because when you have nothing else to talk about in American politics, you push fear - its the LOWEST common denominator.

Mention the huge 800 billion bailout, mention maybe how he's levitating more to the center and away from the left - where he prided himself early in campaign season... FINE.

But enough with the Hussein. G-d forbid one day a Jewish kid with the middle name Baruch would be associated with Baruch Goldstein.. or some terrible dictator with a Jewish name.

get over it, really, its pathetic.

Some good points there, but remember that during the campaign, his non-Muslim supporters tried to keep it hidden.