"Did Rachel Imeinu tell the Soldiers that I sent her?"

The following story is but one of many that have been circulating recently. But today we have an amazing confirmation of it, by two of the great Rabbis of our time. Please read on…

Recently a miracle which happened in Gaza to a group of fighters was recounted by noted rabbis and others: In a combing the homes in the outskirts of a Gazan city, searching for Hamas terrorists and weapons, a Golani officer, along with soldiers of his company, knocked on the door of a house that they wanted to search. An old woman, whose head was covered with a kerchief answered the door. The officer asked her in Arabic to evacuate the doorway, but she answered him in Hebrew, and begged him to immediately get far away from the house, since it was booby-trapped [mined with explosives], and there was a danger to him and his soldiers. There was also the danger of their being kidnapped by the terrorists, and taken away into a nearby tunnel. The officer insisted on entering, but she was more insistent that they didn’t. The officer took note of the house, and approached another one. After a knock on the door, it was opened, and there was exactly the same old woman! The amazed officer asked how she came there, but since but a few minutes earlier, he had seen her at the other house... She again begged him to leave, together with his soldiers, for the same reasons as before. When he asked her who she was, she replied that she was Rachel Imeinu, and she wanted to protect and save the soldiers. A little while later, it turned out that the old woman was right: the houses were booby-trapped, and they had openings to tunnels. The houses exploded, and the soldiers' lives were saved!
This testimony was provided by one of the Golani Brigade soldiers who was injured, and later reported the incident in the hospital. The soldier was interviewed on Galei Tzahal [Israel Army Radio]. 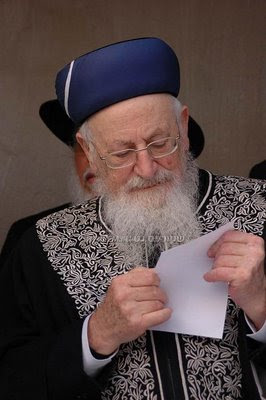 The following is a translation of a story related by Rabbi Shmuel Eliyahu, son of former Chief Rabbi Mordechai Eliyahu, and himself the Chief Rabbi of Tzfat. [A video presentation of this, in Hebrew, can be found here]:
Recently, a story has been circulating about Rachel Imeinu, who appeared to soldiers in various places, and saved them from booby-trapped houses. A great Rosh Yeshiva told me that it was true, and that he knew the man told the story, and told me his name. He asked me: "Is this related to the fact that [your father] Rabbi Mordechai Eliyahu, when he was released from the hospital, went once, twice and three times recently, before the war, specifically to pray at Rachel's Tomb? He didn’t go anywhere else but to Rachel's Tomb."
I heard the story, and told him I would ask.
I asked the Rabbi (my father) whether this was true. He said: "It's true. I told her: 'Rachel, there’s a war. Let your voice refrain from crying, go before the L-rd, and pray before Him for the righteous soldiers, who are fully dedicated, that they should strike, but not be stricken...'
Rabbi Shmuel Eliyahu then said to his father: "You know, she really came," and then his father asked: "Did she tell them that I sent her?..." In those words.
Everyone can judge for himself. If this is the greatness of our soldiers, such tzaddikim [righteous ones], that our holy Fathers and Mothers come to save them, who has the nerve to criticize them?
Many miracles happened during this war: so many missiles were fired, and so many of them fell in open areas. And these were sophisticated missiles, not ordinary. May it be G-d’s Will that the merit of our holy Fathers and Mothers stand in our stead, for us and all the holy House of Israel!
Posted by yitz at January 20, 2009

metsuyan. yasher koach, this is what we need!