Traveling the Red Zone, Part D
Habad Shelter
(Due to the amount of photographs, this article will be sent in several parts.)

This is the Habad Shelter in Nitzan. 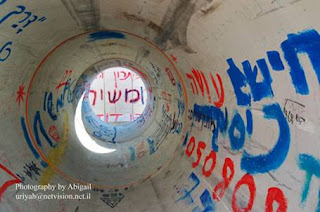 Peering into the tube from the women's side

It could be worrisome for strangers to enter properly within 30 seconds of an incoming Kassam as they try to find out where exactly is the WOMEN's entrance and where is the MEN's section. But, the beautiful thing about Habad is that the graffiti is full of admiration for Meshiach, His mercy, His help, His salvation for Israel ! 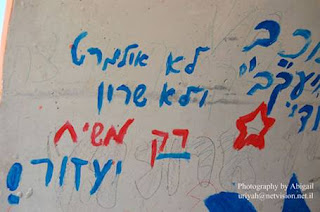 "Not Olmert, Not Sharon, only Meshiach will help!"


When they began to distribute the 'tubes' or 'pipes', as they were put down in the parking areas of the community, they began to roll. Duh! Hadn't thought of that before! Suddenly they realized if the thing rolls when they are just sitting there, they might just roll when a Kassam hits close by. 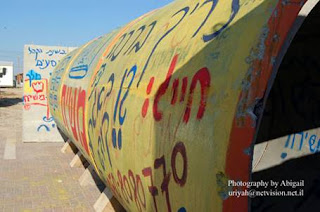 So, they came up with the solution to make wooden wedges to put along the sides, or even a few bricks.

My Hostess, Rachel Saperstein, told the story of a young man who survived a brutal Kassam attack on Neve Dekalim in the former years of Gush Katif. To ease his fears, it was decided for him to have his very own section for security. (As you see in the above photo, in order to make the shelter a LARGE one they put several sections together.) The young man tried hard to make his shelter a place he could stay in permanently instead of running out every time a Red Alert sounded, especially since tension was mounting as the alerts became more frequent. He put his bed out there with lights strung up and a TV/music, plus other necessities for making the shelter home. But at each end of the tube is a cement wall for protection. The boy could not be consoled and was being traumatized more and more over the last few weeks as the war in Gaza increased. He related to the cement section at each end of his tube as "tombstones". Eventually, he had to be taken out of his situation into more peaceful territory for his own peace of mind.


(All photos are copyright and not to be used without prior permission of Photography by Abigail, http://us.mc1104.mail.yahoo.com/mc/compose?to=uriyah@netvision.net.il)
Posted by Sara Layah at January 08, 2009