An Explosive House Of Cards

The Israeli Government, the United States and almost the entire world are building a very dangerous house of cards. 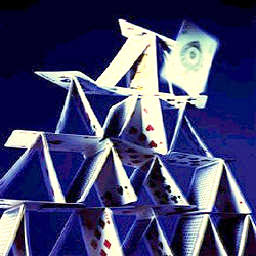 When it collapses, the world will explode. 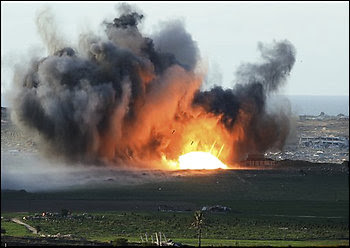 In Israel, most people want Operation Cast Lead to end with the destruction of the terrorists in Gaza. Most of us understand that if we don't destroy them, they'll grow back even stronger and more dangerous.

The problem is that the government, Tsippi, Olmert, Barak etc and their "mentors" in the international community refuse to recognize it:

“...the Annapolis process is based on the understanding that we are working with a pragmatic leadership in the Palestinian Authority while fighting terror. It is a zero-sum game when Hamas is getting stronger while Abu Mazen is getting weaker. The Palestinians need to understand that Israel can share and implement and translate the vision of two states for two peoples with those that accept this vision, who accept Israel's existence and renounce violence and terrorism. Hamas does not. Hamas does not represent the national aspirations of the Palestinians. It represents extreme Islamic ideas, which they share with Iran, Hizbullah and Syria.” (complete article)

They believe that Fatah is better and they're trying to impose Fatah rule in Gaza.

There are a few problems with this "dream scenario."

SM, just saw you pop up on my referral logs. Hope you are doing well and will prevail in the current unpleasantness. You're in our thoughts.

Thanks, Gary, so glad to hear from you.