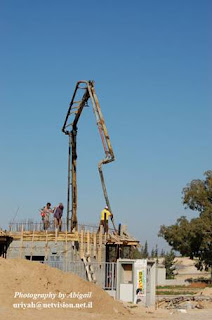 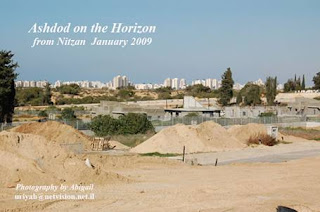 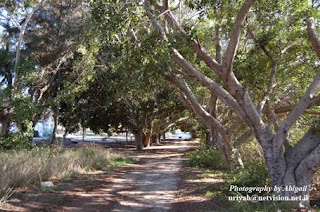 Traveling the Red Zone, Part B
Building New Homes for Former Gush Katif Residents
(Due to the amount of photographs, this article will be sent in several parts.)

Even as rockets continue to fall across the Southern region of Israel , new homes are going up in Nitzan putting big smiles on the home-owners. This is the 'optimism' of Israelis!
The new location is settled behind what has been referred to as a caravilla ghetto toward the beach and surrounded by a forest of trees which makes a breathtaking view. The community will sit near the beachfront between Ashdod to the North and Ashkelon to the South.
I asked what will happen to the caravillas as residents move out and was told that they will be removed to some unknown location, but no one will be able to move into them since they are temporary dwellings with a lifespan of not more than 5 years, of which 3 years has passed.
When touring the area, I met several owners anxious to finally get on with permanent housing, and at least having a little say-so in how and what they live in.

(All photos are copyright and not to be used without prior permission of Photography by Abigail, http://us.mc1104.mail.yahoo.com/mc/compose?to=uriyah@netvision.net.il)
Posted by Sara Layah at January 08, 2009