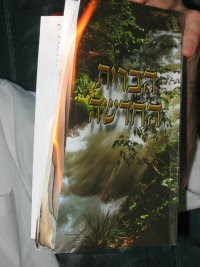 I can't believe I have to thank the BBC for fairly fair coverage, and for exposing the crux of the matter on the recent "disposal" of missionary material. This comes within days of having issued kudos to Haaretz for the best Jews for Jesus trashing article I have ever read. Don't tell me that salvation for Torah observant Jews is going to come from the secular Left! Leave it to G-d to pull off something like this.

While the American Jewish community is wringing their hands over the burning of "Christian holy books" - and memories of Kristallnacht, pogroms, and medieval blood libels dance through their heads - we have Messianic lawyer/pastor Calev Myers demanding that the Orthodox Jews be rounded up, arrested and put on trial for their crime of being loyal to G-d and the Torah.

So I can't believe I have to turn to the BBC to shed true light on another very important angle of the issue:
"Proselytizing to Ethiopian Jews is an historically sensitive issue".

Not only is it historically sensitive , but it is downright explosive. As the Jerusalem Post reported over a year ago, the Ethiopian Jewish community in Israel was threatening "violent reactions to the missionaries if their activities are not stopped". "People here are threatening to resort to extreme measures, such as blowing up the missionary headquarters with gas tanks."

Maybe the Deputy Mayor should be thanked for acting quickly and doing the right thing.
I have been pleading for proper halachic guidelines and Knesset legislation for a year now. Nobody wants this issue to blow up in our faces, but there is nothing more provocative to a Jewish soul than a missionary who wants to snatch it.
At the end of this post is a fair and balanced sampling of articles on the Ethiopian Jewish issue.
This is not an easy one to grapple with. But American Jews and other politically correct friends should stop worrying about "what the goyim will think" and take a good look at what's happening in Israel. We have a major missionary problem here, which is a direct consequence of an unregulated relationship with Evangelicals. The simple Jews of Ohr Yehuda found themselves, inadvertently, in possession of idolatrous material - and American Christian sensitivities were not first and foremost on their minds. But getting rid of the stuff as quickly, efficiently and in an halachically permissible manner was. And the true Torah observant Jew always turns to Halacha before he or she turns to America.
Remember how the BBC and other news agencies had a heyday over the wig burnings in Brooklyn a few year back....
Rabbis spark wig burning rumpus
Hundreds gathered in the Brooklyn suburb of Williamsburg on Sunday to ignite a bonfire of more than 300 wigs. ..

Well I lashed out at the BBC back then (but today's another day).
I am concerned about the sacrilege that takes place when the BBC and other worldwide media outlets man-handle the story...Very few major news services bothered to investigate the facts, but they did revel around the bonfires of burning wigs in Brooklyn. Now, I don't want or expect your average indolent reporter to delve into the complex workings of Jewish religious observance...

Jerusalem Post:
Ethiopians fight Christian proselytizers
Finally in Israel, some Falash Mura are turning to Jesus
Eyewitness: 'A great assembly shall return here'
Haaretz:
Ethiopian leaders: Stop the Falashmura aliyah to Israel
Israel Insider:
"Most of the Falashmura are not even Jewish"
Posted by ellen at May 22, 2008