"Battling" On The Roads

Those of you who read my husband's blog know that he frequently posts about posters he sees in Jerusalem, especially the chareidi neighborhoods. Well, I don't wander those same streets. We have a different genre where I hang out waiting for rides.

At Givat Asaf, the t-junction to Beit El, and at the "ride stop" outside of Ofra, the latest posters concern Moetzet YESHA, Council of YESHA Communities. Many people are totally disgusted with its activities.

It has been years since Moetzet YESHA has been involved with actually establishing new communities, or even neighborhoods. They headed the totally disastrous, F for Failure campaign to cancel Disengagement.

Now they've been busy negotiating with the government about the destruction of Jewish communities, shades of the Judenrat. I know that many people don't like it when modern Jews are compared to such people, but you can't deny the parallels.

Pinchas Wallerstein, former head/governor of Mateh Binyamin, the Benjamin Regional Council, is now head of Moetzet YESHA. Recently there were reports of opponents damaging his car. This first poster decries the act. A slew of rabbis signed the "emotional" letter. 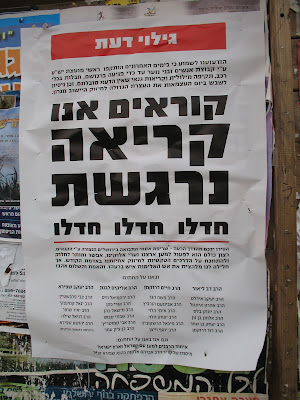 This second poster claims to have the actual agreement between the government and Moetzet YESHA. 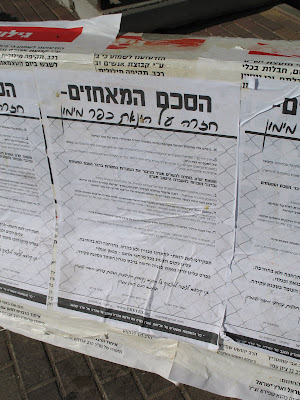 This entire issue of whether or not Moetzet YESHA is doing what it should be doing for yishuv HaAretz, settling our HolyLand, is one of the reasons why the youth has no respect for authority. The phenomena began during the Disengagement protests and has continued. Personally, in all honesty, I must admit that I admire them and am embarrassed that we adults cannot offer them the leadership and role models they deserve.

Shalom Batya!
Perhaps Mr. Wallerstein is guilty of the very crime he is accusing others of. I heard from a reliable source that he destroyed anti-Yesha Council posters in Ariel and broke into a car containing more posters and destroyed them too. Can anyone corroborate or refute this?
As others have pointed out, what do you expect from the Yesha Council? They are employees of the Israeli government. The youth do have rabbis and other role models whom they respect and follow. The Yesha Council and certain rabbis do not agree with these individuals and therefore refuse to believe that the youth are not lawless and disrespectful towards their elders. There are no rabbis associated with the hill-top youth? There are. None of them support blocking traffic? Some do. And at least 50 well-respected rabbis signed a statement that a soldier should refuse orders when necessary.
Hadassa

What would you have done differently to stop the disengagement?

Mind if I butt in westbankmama? Good! (and thank you) I lived in Gush Katif for 14 years. The Yesha Council torpedoed any logical plan that anyone had, including Mateh Gush Katif, which was squashed by them. According to the Yesha Council blocking roads was criminal, even though it's acceptable for striking dock-workers and students - including burning tires. No-one likes the inconvenience, but it's seen as a legitimate form of protest. Disobeying orders in the IDF was also unacceptable, even though Rav Shapira, ztz"l, wrote a very clear opinion that it was forbidden to have a hand in any way with the expulsion. MANY of his students, including rabbis, did not listen to him and published dissenting opinions, despite the fact that they were not his equals, and did not leave him to find another mentor. Then there's the famous K'far Maimon fiasco. 60,000 people baked in the sun for three days and then were sent home with a variety of excuses. Three rabbis who might have been able to convince the crowd to act were not consulted by their colleagues and not allowed to publicly speak. After the expulsion the Yesha Council admitted - I saw the interview - that they had never had any intention of proceeding to Gush Katif. Did any of the 60,000 know that? The bit about the wire-cutter looking like a weapon and chance of bloodshed was nonsense. Ten men could have walked forward, yes walked calmly, and flattened the fence. The soldiers were tired, unmotivated and vastly outnumbered by the 60,000. Would the IDF have opened fire on a group of peaceful people marching, including women pushing baby carriages? Soldiers would have blocked some, not been able to block others but at least the Orange Camp would not have capitulated. In Gush Katif itself members of the Yesha Council and the NRP were present to try to persuade us to leave quietly. The NU was in favor of non-violent resistance. I could go on, but this is already a bit long.
Hadassa DeYoung
K'far Darom/Elon Moreh

westbankmama, I saw serious "holes" in the official lines/slogans as early as the Likud referendum, when I told the young kids who were sent to talk to Likud members that they were given the wrong message.

From day one I said that Disengagement wasn't about a few thousand peaceful families losing their homes, it was about the future of Jewish life in Eretz Yisrael.

The Bayit Leumi program made sense, but the leaders were jailed and Moetzet YESHA pushed its way in and gave orders which totally contradicted B"L. I posted a lot about it on Shiloh Musings. Do you want links?

From what I remember reading in 'Mate Tzafon' (http://www.matezafon.org/), Rav Lior was misled into signing the declaration condemning those who acted against the Yesha Council, and other rabbis signed because he signed.

Yoni, thanks for the clarification.

Hadassah - so you think that if Moetzet Yesha had come out for blocking roads, then many more people would have done it, and...... I used to agree with you, until Amona. When I saw the violence, I realized that Moetzet Yesha acted responsibly by not calling for blocking roads. I was also at Kfar Maimon for the whole time, and felt ridiculous at the end when we were blocked from going on. But again, after Amona, I realized that the decision made by them saved a lot of bloodshed.

wbm, Maybe you're right about the violence in Amona, but this was post-Disengagement. And there was violence, and Pinchas was there. I remember seeing his rediculously staged "climb" on TV.

Moetzet YESHA has done everything in its power to stifle new leadership. And it hasn't fought to establish any new communities.