Blessing or Curse: Praying for us or Preying on us? 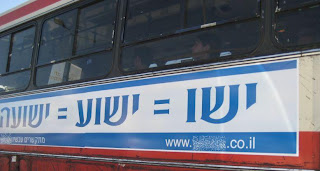 Posted by Ellen W. Horowitz
Jews for Jesus invade the Holy Land: “making the Messiahship of Jesus an unavoidable issue to our Jewish people.”...
Targeted proselytizing has made a comeback in Israel. Democracy, liberty, and tolerance rule the day - and so does chaos, blasphemy and idolatry. Is Israel ready for this 5-year, mega-budget campaign? Websites and full page newspaper ads in English and Hebrew, Billboard and bus banner campaigns, and an army of missionaries in public and private places.

When it comes to soul-snatching even the most secular of Jews will remember who they are and rise to the occasion. Just how provocative is Jews for Jesus in Israel?

The veil momentarily lifted from the eyes of Haaretz…
The very thought of one of their leaflets brought Bradley Burston of Haaretz out of that "Special Place in Hell" to see the light.
This is a must read (from 2006):
Why 'Jews for Jesus' is evil

Zachariah 8:23 gone awry?
Thus saith the Lord of hosts: In those days it shall come to pass, that ten men shall take hold, out of all the languages of the nations, shall even take hold of the skirt of him that is a Jew, saying: We will go with you, for we have heard that God is with you.'
It appears that certain gentiles have interpreted the above to mean that they can cling to us like leeches, or rip those hems and spiritually rape us.

Nightmare scenario: Playground from Hell?
Evangelical Christians continue to give generously to Jews in distress, while insisting on their religious and democratic right to express themselves via evangelism in Eretz Yisrael.
Now here’s a frightening thought…
What if, while your child or grandchild is frolicking on a plastic playground donated by evangelical friends, an evangelical Jew for Jesus - who loves and craves Jewish souls – happens to meet up with your child at the bottom of the slide?
I always told my kids to forget the playgrounds and preferred that they climb on the rocks, run up and down the hills, and roll in the dust of Eretz Yisrael. "For Your servants have cherished her stones and favor her dust" (Psalms 102:15).

The obvious solution (and a real blessing) would be for those Christian friends who truly love and respect Israel and the Jewish people to take real action. Rather than issue another denial of their direct involvement in missionary activity, they should issue a clear, public, and unequivocal condemnation of such activity in Israel (but I doubt that an Evangelical can condemn evangelism any more than a Palestinian can condemn terror?). Friends of Israel, take the challenge and prove me wrong!
But then there is another problem. We Jews are so afraid to alienate our best friends and lose our monopoly on the plastic playground market that…
A legal opinion prepared by the Justice Ministry opposes legislation that would strengthen efforts to combat missionary activities in Israel
"Anti-Missionary Bill Undermines Freedom of Expression"
Of Blessings and Curses
Bilaam tries to curse and ends up blessing. I imagine a prophet like Bilaam looked upon the Israelite camp and saw the beauty of a structured, moral and ethical community- and he just couldn’t help himself. So despite all of his rottenness, a blessing emanated from his lips.

And now we have millions of Christians who claim to have every intention of “blessing” the Jewish people, and we know that some of those people are very sincere (and others quite insincere), but if we - the recipients of their “love offerings” - are bereft of Torah guidelines, values, accountability and legislation, than this entire enterprise is in danger of being nothing more than a major curse.

The Righteous Gentile Among Us

I just gotta close with another rare, but grand, Haaretz moment (Mashiach must be around the corner)

Look at this truly moving clip of Jon Voight. His heart is with the Jewish people.

Note that Voight was raised a devout Catholic. He is not affiliated with evangelical groups or mega church leaders. He appears to take and individual, moral, and authentic heartfelt stand with the people of Israel. This is a man who has done some real soul wrestling. And although he is biblically inspired, he handles himself with the utmost respect while in Israel. I doubt you will find him publically referring to Jesus, spreading the gospel, or hailing Christianity while on his visit here.

But you will find him endorsing the Noahide laws and expressing great respect for Judaism as a religion:

Voight was brought up Catholic and has no intention of converting to Judaism. But he says that of all the religions he studies, he has a special fondness for Jewish learning and values. "Judaism is an amazing fountain of information. It’s not the only answer, but I have tremendous regard for it." ...
“,,,They [the Noahide commandments] appeal to my own sense of what I feel is a high purpose, which is to try to get everyone to an understanding of what they’re asked to do, what life’s responsibilities are. These very simple seven laws of Noah are good basics." http://www.jewishjournal.com/home/preview.php?id=7338
Posted by ellen at May 19, 2008

Batya and Ellen, Shalom!
Anyone who wants to be called a Christian, by definition cannot be a friend of the Jews. Only the Noahides who accept the Torah can accept the Jews for what they/we are. Perhaps there are Christians who do not realize this and are offended by statements of this sort. If they are sincere in their love of Israel and G-d they will take the time to learn the truth. Sadly it is true that many Christians are truly more pro-Israel than many Jews are, but that is obviously not a good or even acceptable situation.
Hadassa

Hi Hadassa,
Thanks for your comment. I think practicing Christians who place their theology above all else do indeed have a real issue when it comes to respecting and accepting Jews and Judaism. There are irreconcilable differences between Judaism and Christianity. And the basic tenets of Christianity are "untouchable" for the Jew.

However, there are outstanding Gentile individuals who may identify themselves as "Christian", but who nevertheless are able to think for themselves. Although biblically or spiritually inspired, they are able to take an independent, moral and intellectual stand with Israel and the Jewish people. I think it requires a lot of soul wrestling and tremendous inner strength to take that kind of stand.

It does seem, as you say, that becoming a practicing Noahide is the ultimate solution for those who truly want to accept, respect and embrace the Jewish people. But I think coming to that realization will take time and will be a gruelling spiritual process for many.

So until that time comes - may it be soon - our friends who are Christians will simply have to understand that it is absolutely unacceptable to spread the gospel or tout jesus among Jews in the Land of Israel.

And we Jews need to stop trying to
madly seek common denominators that ultimately cause us to cross forbidden lines. We will instead have to build relationships on a respect for differences and maintain lines which separate different faith communities.

Any Christian who visits Israel- the land and home of the Jewish people - will simply have to keep jesus under wraps and respect the
sensitivities of the Jews living here.

Ellen, in your opinion, do many American non-Jews, and for that matter Jews, think that Christian is a synonym for gentile?
Hadassa

Hadassa,
I grew up in the Midwest in America and always referred to Christians as "Gentiles". It sounded nicer than "Goyim". but when I came to Israel, nobody seemed to feel that the term "Goy" was derogatory, as it just means "nation". I see that a lot of the more respectful Christians who visit Israel refer to themselves as "Gentile", whereas the more zealous evangelicals insist on the term 'Christian".

this news item just in:

I think Hadassa's hit a point there -- i.e., many Americans seeing "Christian" as synonymous with "gentile". It could be said that "Christian" is more or less the "default mode" in America. Though the US is not officially a Christian country, American civil culture is certainly a Christian-dominant culture. (E.g.: Christmas and Good Friday are official government holidays. Yom Kippur or [lehavdil] Kwanzaa or Buddha's Birthday are not. Schools have Christmas vacation, Easter vacation, etc.) An American youngster who has spiritual inclinations [and who isn't specifically Jewish or Muslim or....] might just naturally assume that they have to be Christian because they know no alternatives. I suspect that many, were they to discover the concept of Noahide, would figuratively point with delight and say, "Yes!! That's it!"

Hi Maoz,
I think that is an interesting point, and I didn't pick it up at first (sorry Hadassa).

The Lubavitcher Rebbe did try to launch a campaign to promote the Noahide laws. I'm not sure how well it was received.

But I think that the time may ripe.
Many people are very turned off by the fact that the Christian Right in America has let jesus out of the church closet in a big way.

I think the wall that was placed between church and state allowed America to thrive as a multi-cultural society for many years.
People of all faiths were far more comfortable with the concept and usage of the terms "G-d", and "Creator".

The current emphasis placed on jesus in political and cultural life in America, alienates many people and represents a sort of religious regression - a departure from montheism.

Wonderful post! It's encouraging that a celerbity is familiar with with the Noachide Laws and can hopefully spread knowledge of them to others.

Batya: What you wrote about true evangelicals is right on the money. An evangelical must, by definition, spread the gospel. I'm a former Catholic too and never once did I hear a homily in church about preaching to Jews.

This is unique among evangelicals.

The greatest thing a Jewish parent can do to ward of these soul snatchers is really simple--instill the importance of the first verse of the Shema from an early age.

Christians do a bait and switch. First they trick Jews into believing J was the messiah. That's bad enough but then they gradually instill the lie about him being G-d.

They don't want Jews really to believe in him as messiah but G-d. That's what unsuspecting Jews need to be warned of.