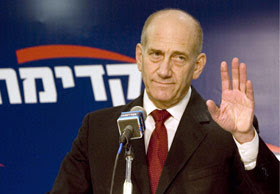 Yes, one thing I think everyone would agree on. Ehud Olmert is a very ambitious man. That's why I'm rather amazed that anyone should find it strange that he was collecting campaign funds from Talansky when he was a cabinet minister and not "running for office."

Olmert has been running for Prime Minister since he was a kid.

Every move Olmert has made has been with one goal in mind. Now that he has reached it, I wonder... He's destroying the country. Does he plan a grand luxurious "retirement?" Where would that be?

Let him just take "early retirement" now. Should this be our new slogan?