What Does Huckabee Really Think?

Mike Huckabee is here in Israel, experiencing the Israeli political divide. Yesterday he was at the Shepherd's Hotel, where he could see and hear protesters from opposite sides of the Israeli spectrum. 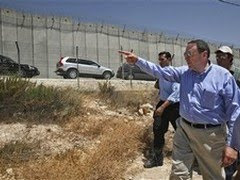 Honestly, even for me it's inconceivable that "civil rights activists" don't protest when Jews are discriminated against and forbidden to live in Jewish-owned property.


We mustn't forget that he's running for the United States Presidency, an ultra-marathon race, considering that the next elections are more than three years off in the future. He's setting himself up as counterpoint to newly elected Barack Hussein Obama.

Former Arkansas governor and US presidential hopeful Mike Huckabee kicked off his visit to Israel on Monday by telling reporters that recent American policy toward the Jewish state has been "far more harsh" than that of previous administrations. He questioned US President Barack Obama's authority to dictate where Israelis could or could not live in Israel.

"My question is how the government of the United States would feel if Prime Minister [Binyamin] Netanyahu began to dictate which people could live in the Bronx, which ones could live in Manhattan and which could live in Queens," Huckabee told reporters as he toured the City of David in east Jerusalem.

Please don't forget that even Obama said some very strong, pro-Israeli security things when he ran for president. All candidates do, and then when the winners start their new jobs, suddenly it all changes. All of a sudden Jewish Israeli rights to live in their own homes in safety and security become "problematic" and we're "strongly advised" to get thee to a ghetto.

So please forgive me if I'm rather cynical. Push comes to shove, yes, put the politicians in office and they all sound the same. Our salvation won't come from foreign politicians. It's up to us. Yes, like Dorothy, who was wearing the magical ruby slippers all along, we must save ourselves.

We need strong Israeli leaders who have their priorities right.

I'm right with you, as I usually am. I'd like to add that we can't save ourselves alone. We have to do what we can and believe in Hashem. There is a great sticker that says (translated), "I am zero, Hashem is One, together we are 10". The Tanach, the Sages and the rest of Jewish history teach us that counting on the big powers is a false faith which will not save us. But failing to do our part is also inexcusable as well. And playing to lose while trying to look good, as some of our so-called leaders did during the expulsion, is beyond belief and lower than low. Those who believe that the danger of rebellion and violence is too great to risk have a point. Let them be honest and say it straight. Truth has to be the name of the game. If you lose, if people don't do what you would do, tough. Let's get to work to raise consciousness and defeat Netanyahu next time around in the Likud primary while supporting a united national and religious camp as much as possible. I'd still like to see electoral reform, but don't hold your breath. Also pray a lot, but it's no substitute for action.

" Please don't forget that even Obama said some very strong, pro-Israeli security things when he ran for president. "

Huckabee is not Obama.

They along with leftist appeasers are Huckabee's biggest critics.

goyish, action is a form of prayer.
Amerisrael, true, but it seems like nothing changes a person more than high office.

I warned American Jews last year that Obama's foreign policy was to be predicated on sticking Israel's neck out for the Arab knives. Many are still living in denial, but are coming around. I work on these poor souls on a case by case basis. After Cairo it is much easier.

Huckabee is a minister and very well may have the same apocalyptic agenda that Bush had. I have not paid much attention to him, but will give him a closer look now that he appears to be far more popular. I don't know if he'll take America to any better place than Obama, at least domestically. With any luck I'll be there instead of here and it won't matter as much.

Muse, you are right. In the end it doesn't matter what American politicians say. What matters is what the leaders of Israel are made of, what their priorities are. Someone with a decent amount of yirat shamayim, and a deep and abiding love of Eretz Yisrael is far more important now.

I have liked what I've seen from Tzipi Hotovely for the most part. People like her give me hope that the new generation is made of tougher stuff. At least that's how I see it from here.

The best thing Israel can do is thank America for its 3.8 billion dollars, but that they can keep the change. What is, in the end, a small amount of money doesn't give America the right to dictate policy in Jerusalem, especially when America's embassy is still in Tel Aviv, and American citizens born in Jerusalem cannot denote Israel as their country of birth.

The government of the United States is not the friend of Israel people believe it to be. The American people are another story.

Shtuey, thanks. Interesting that you say that the American people are more pro-Israel than the politicians.
Most people, no matter what they do and where, are incapable of predicting the results, the effects of policies. They fall for snappy and illogical slogans.

I actually had a whole post of Huckabee quotes prepared for this blog, but I guess you beat me to it. Let me just say that I take with a lump of salt your quotes from the JPost, while I am much more inclined to accept those of Arutz-7, from which these are from:

QUOTES OF THE WEEK

“My question is how would the government of the United States feel if Prime Minister Netanyahu began to dictate which people could live in the Bronx, which ones could live in Manhattan, which could live in Queens, and say, ‘We only allow certain people to live in those neighborhoods.’ How would that go over? It wouldn’t go over very well.”

“Israel grants its citizens freedoms that most people in the world do not enjoy. In Iran, when people tried just to raise their voices over the vote, they were shot by their own government – while here, these protestors are protected by their own government. But freedom also means the freedom to live where one wants.”
“No American would tolerate the government telling some citizens that they can’t live in certain areas because they’re the wrong color or the wrong religion.”
“I can only imagine what an American would say if someone suggested that Baptists wouldn't be allowed to live in some neighborhoods, while Catholics would be banned in others.”

“I’m not sure where we would get the authority to demand of the Israelis what they should do in their own country.”

“The Palestinians are asking you to leave this place [Maaleh Adumim]?”
“If they want you to leave, where exactly do they expect you to go?! And if the Americans realize that you are not leaving, then why should your growth and job-creation and the like be stopped? You should remain and simply stop growing?!”

“I think that there is some concern that many of us have who have been coming to Israel for many years. I’m not Jewish, so I am not trying to stand up for the Jewish people but for the freedom of the Israeli people who I feel have an organic relationship to the United States as the only democracy in the Middle East, as the only place where freedom and liberty and personal capacity to make choices really thrives. It’s in the vital interest of not just the Middle East but the world that freedom exists.”

“I think we can certainly advise as a friend to Israel but we have no right to dictate and outright tell another country what it should or shouldn’t do. Heck, we don’t do that with North Korea!”

“I see no reason why the Arab world needs yet another state.”

– Former Arkansas Gov. Mike Huckabee, on a private trip to Israel [Monday and Tuesday]. Huckabee is currently considered an early front-runner for the Republican Party’s nomination for US Presidential candidate for the 2012 elections.

-there's no such thing as 'chosen people' or 'our land'

-obama is very clever and he's not anti-israel. he's just not as pro-israel as previous presidents and i think that's good for the middle east

Anon 20:36--While you may not believe in a Chosen People who believe that Israel is their Land, many others who visit & post here do.
As to Obama being as pro-Israel as previous Presidents, with the exception of maybe Carter & some of his predecessors, I don't think you know what you're saying!

Sure, 'right-wingers' tone down once in power, but at least the ethnic cleansing rhetoric is finally becoming legitimate. Getting rid of settlements is simply anti-semitic discrimination. Despite off hand remarks by some Arabs, Jews will not be welcomed into Arab urban areas (which prohibit selling property to Jews).

Calling the kettle black: Disengagement and 'convergence' are whitewashed terms for ethnic cleansing.

Muse, a poll just came out in the States that found 70% of those asked considered Israel an ally of the United States.

I think support of Israel in Washington is a fashion. The State Department has always sacrificed Israeli interests on the altar of Saudi oil. And while the Congress routinely approves loan guarantees etc, the policies regarding the American embassy, and the total failure to recognize Jerusalem as the capital of Israel says it all. They like Israel in theory. They like the votes of American Jews, and their campaign contributions. But when it comes to the embassy there is no evident pressure. When it comes to Yesha there is no bold statement of support from Congress.

Hillary Clinton is a perfect example. The woman who kissed Suha Arafat became a staunch supporter of Israel as the Senator from New York, and candidate for President. As Secretary of State she is Obama's little parrot. She knows what Fatah is all about, but she enables Obama's policy of Israeli national suicide without question.

I was amazed that 71 senators wrote to Obama regarding he call for the end of PA anti-Jewish propaganda. Of course no one is really speaking up to say that negotiating with Fatah and Hamas is an act of futility. To me a pro-Israeli politician does not attempt to make Israel sit down at the table with a party that wants her destroyed.

With all due respect to the commenter who doesn't understand what the term "chosen people" means, or what our connection to the land is, Obama is not "Pro-Israel" in any degree.

josh, yitz, shtuey, I agree with what you've written. Thanks!

Bottom line.....stop worrying about who leads America, and worry more about electing Israeli leaders who won't sacrifice our sovereignty.
If we have the right leader in Israel, it doesn't matter who is in the White House.