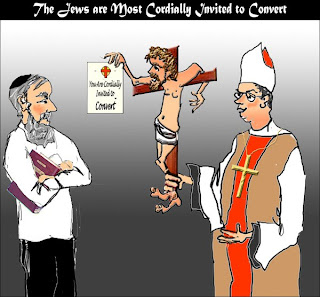 Posted by Jewish Israel
Jewish-Catholic relations have once again hit a stumbling block. It seems U.S. Catholic bishops deem interfaith dialogue with Jewish groups as an evangelizing opportunity - a chance to “invite” Jews to become Catholic. A new document appears to signify a dramatic shift in position from the 2002 Reflections on Covenant and Mission statement, which downplayed any attempts by the Catholic church to target Jews for conversion.

This latest rift is one of a number of incidents that may mark a new (old?) and darker era in Jewish –Catholic relations. But American Jewish leaders across the religious and political spectrum have offered a unified response.

Jewish Israel explores the downhill trend in Jewish-Catholic relations, as well as the unified statement by
• the American Jewish Committee
• the Anti-Defamation League
• the National Council of Synagogues
• the Orthodox Union and
• the Rabbinical Council of America.

Taking the gloves off and confronting the Catholic church over a shift in their evangelizing stance is a step in the right direction, but Jewish leaders will have to wake-up and realize that it’s the evangelical churches and their messianic proxies which pose the far more formidable threat to the Jewish faith and to the spiritual continuity of the Jewish people.

One of those Jewish community leaders who only sees the good, but turns a blind eye to the bad and the ugly side of the evangelical coin is Jerusalem Post columnist Isi Leibler. Jewish Israel penned a Right of Reply to Isi, but the Jerusalem Post passed-up the opportunity to publish the response. Israelinsider has picked up both opinions.

“Rather than lapse into a predicable rant about those liberal Jews who have “embraced postmodernism” or dismiss concerned Orthodox Jews as being “ill-informed” , Leibler should recognize the natural aversion to our “unconditionally” embracing evangelical Christians as a healthy, unifying trend – and as a survival instinct among all of our people. After all, the one common denominator among all Jews –secular, religious, and all shades in between, is that we don’t believe in Jesus as a lord or savior.

As long as evangelicals evangelize, the Jewish people will have to be vigilant and monitor the relationship carefully. To take a critical look at Israel’s relationship with fundamentalist Christians is neither “misguided”, nor “churlish”. It’s simply being responsible and Jewish. It’s regrettable that such a sensible stance over this formidable challenge makes Jewish leaders terribly uncomfortable.”

It seems the Catholic Church is taking a page from the evangelical movement regarding missionary activity.

When I left the church in 2002 there weren't any sermons about missionizing to Jews. In fact I don't recall any references to converting Jews.

That they are publicly encouraging Catholics to become active missionaries is very disturbing and appalling.

I've always been suspicious of these inter-faith dialogues between Christians and Jews. To Christians ANY dialogue marks a foot in the door and a victory.

Jews shouldn't participate in them at all.