They're Not The Same

First I saw an article in In Jerusalem about some foreigners who have come to Israel to break the law. They're rebuilding illegal Arab homes, which had been destroyed by the government. As I tried not to grind my teeth, all I could think of was: Why don't Jewish volunteers come to help build Jewish communities here in the Land of Israel?

Then in another section of the Jerusalem Post I found an article about that very thing. 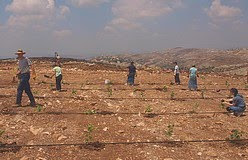 "We are working to strengthen Israel's hold on this land because the Jewish people has every legal, moral and historic right to this land," Zionist Freedom Alliance head Yehuda HaKohen said on Tuesday, as he supervised about a dozen program participants planting a vineyard on a hilltop near the Har Bracha settlement, just outside Nablus.

"For us the main issue is justice. When we come here to build and plant and support local residents, we are not simply taking a political stance on Israeli policy. We are resisting an historic crime from being perpetrated against our nation."

I was glad to read this, Jews are helping Jews build and plant for Jews in the Jewish Homeland.

The group helping the Arabs is something else. It is being funded by a foreign country, Spain, interfering with Israeli law and judgements. 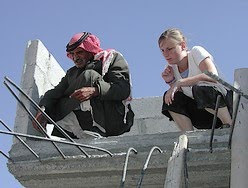 "The Spanish government is funding the camp again this year. They have paid for the 42 tickets of young people to come to the work camp, so that is pretty interesting that governments are starting to encourage people to come and resist the occupation," Halper told The Jerusalem Post.

Why is Israel permitting such a thing? Apparently, it's not the first time. No other country would allow foreign governments to support such actions.
Posted by Batya at August 15, 2009