I Wouldn't Buy A Used Car From That Man 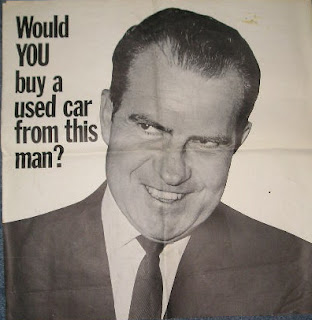 A few decades ago, the saying in America was that nobody would buy a used car from Richard Nixon. But I think that he was lots more reliable and loyal to his country than Israel's Defense Minister Ehud Barak. (Think of him as Ehud, like Olmert and Barak like Obama.)

Ehud Barak has been telling the Israeli public that they should buy the latest United States "Peace" Plan sight unseen.

"In the coming weeks, their plan will be formulated and presented to the parties," Barak said, according to a spokesman for Israel's parliament who briefed reporters on the defense chief's remarks to the Knesset Foreign Affairs and Defense Committee.

"I believe that Israel must take the lead in accepting the plan," Barak was quoted as saying.

From experience, they could be pushing an Edsel at us. Their track record in the peace department is frighteningly poor. Let them do their experiments on their own population.

Why should, why is Ehud Barak so enamored, so insistent that Israel obey America's dictates?

I have concluded that Obama has hypnotic powers and that ideologically left leaning individuals are especially susceptible to falling into his trance. He has used virtually the same rationale as Barak is using to sell everything from government run corporations to government run health care. Let's hope that Israelis are less likely to fall for it.

A warning from an American. BO's upbringing seems to have had considerable connection to an, er, undesirable Muslim sect.
Google his youth and then let Olmert know your feelings about him.
I do not believe he is a friend to Israel.

kae, I can't see what people see in him. Unfortunately, Israelis aren't immune to "spells."

catmoves, thanks for your input, but Olmert's finally out of office. We have Bibi now and a different set of problems.