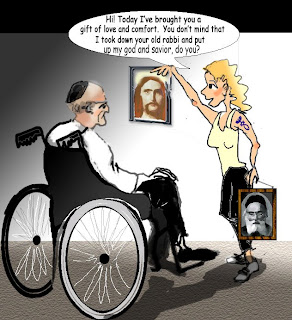 According to a recent Jerusalem Post report, a 94-year-old Holocaust survivor who was suffering from dementia was allegedly “converted” to Christianity shortly before her death by two women who were hired to play music and speak with her. Unbeknownst to the elderly woman’s family, the musicians were messianic Christian missionaries – one of them a sixth-generation sabra. Equally distressing is that the social worker who recommended the women was an Orthodox Jew who was unaware of their beliefs.

Hardly an isolated incident, Jewish Israel explores how this type of subterfuge is widespread among home caregivers as well as volunteers in hospitals, rehab centers, and institutions for the developmentally disabled.

The historic irony in that many “Jewish” hospitals” and institutions were originally established to enable Jewish patients to feel comfortable in a religiously familiar environment where they would not be subjected to religious coercion from a devout evangelizing staff. These same hospitals are now welcoming missionary volunteers into their corridors.

[note: a good number of the Christian volunteers and paid staff do abide by the rules, offer excellent care, and do not evangelize.]

When the “good news” is delivered to the wrong people, it becomes torture rather than “comfort”. Jewish Israel sees this as a dignity of life issue. Causing spiritual confusion to Jews of a ripe old age – or any age - surely falls into the realm of psychological and emotional abuse, and causes immeasurable distress to families.

Meanwhile at least one well-respected “Christian Zionist” group has been taking Holocaust survivors from Sderot on day trips to the missionary village of Yad Hashmonah near Jerusalem - where the majority of the residents are “ Israelis who believe in Yeshua as the Son of God, as their personal redeemer and as the Messiah of both Jews and Gentiles.”

Jewish Israel wonders if the primetime portrayal of suffering elderly Holocaust survivors, which is often used to raise funds among Christian groups, also presents an impossible enticement for fervent evangelists who feel compelled to “save” souls and offer “comfort” in the form of Jesus?

Read the full report on this heartwrenching issue at JewishIsrael.
Posted by Ellen at 1:22:00 PM

Several weeks ago, we were promised from JewishIsrael a big expose of the attack on missionary Ortiz. Hopefully, it will be published soon.

I was wondering if they could investigate the dozens of Xians who come with the hayovel organization and volunteer help the settlers of Itamar, Itzhar, Shilo, and other places with their 'harvests'.

Hi Josh,
As a preview, three out of the five main sections on Ortiz are posted. the full report is forthcoming.
In the meantime go to
http://jewishisrael.ning.com/profiles/blogs/the-ami-ortiz-ariel-bombing
and read

3) Exploding the myths and exposing the lawyer

Upcoming:
4) The Ariel Money Trail
5) Jesus goes to Kentucky and to the State Department

Jewish Israel is also collecting information on missionary organizations and individuals who are targeting the communities in Judea and Shomron. Information should be sent to info@jewishisrael.com