And All I Did Was Grimace and Mutter 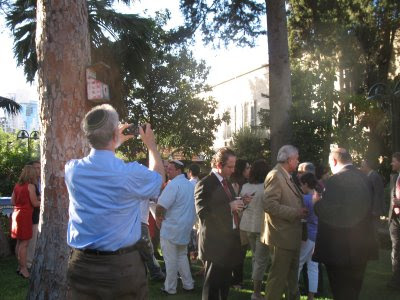 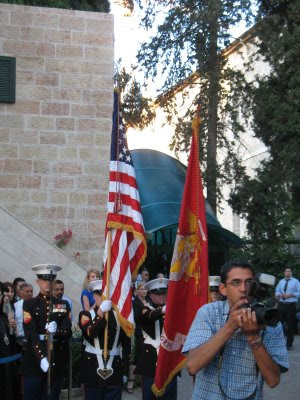 We were at the United States Jerusalem Consulate's "July 4th" celebration. We've been invited for quite a few years, at least fifteen, if I'm not mistaken.

In the early years, we were among the very few blatantly (in the uniform of kippah for him and hair-covering for her) Orthodox Jewish attendees. Most years there was a "kosher table," but this year it seemed even more kosher than usual. This year there just wasn't some food with a sign, there were people "guarding" the food. That's a Halachik (Jewish Law) requirement. The food was dairy and parve, which meant that those who wanted the Ben & Jerry's ice cream could have the ice cream for dessert. In previous years, they had Hagen Daz. 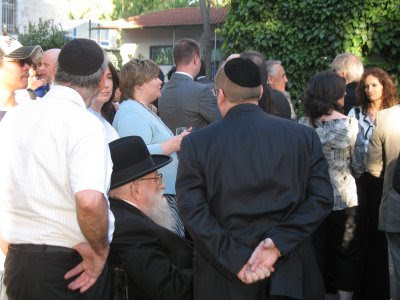 I didn't grimace because of my diet. It wasn't all the traif, Israeli loony Left and Arabs which bothered me. 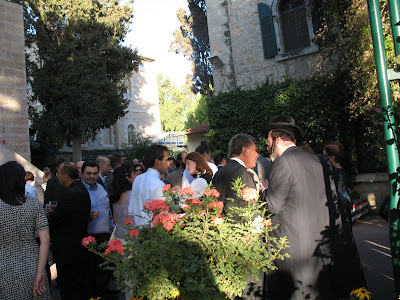 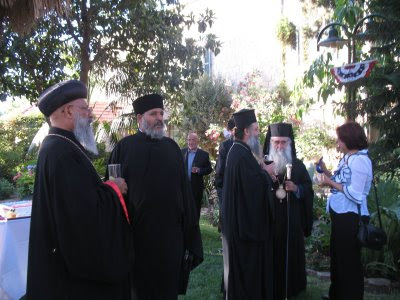 I didn't like the message of the outgoing U.S. Counsel General Jake Walles. He made it very clear that he and the American Government would do everything in their power to create a sic "Palestinian" State. He went on and on and yapped and yapped and said other nonsense like that the United States was founded for freedom. Historically that isn't true. Did you ever hear about the Boston Tea Party? "No taxation without representation." The American Revolution was all about money, not freedom. The liberty/freedom stuff came later.

If a high-ranking American State Department official can't get American History straight, do you really think he (and they) know anything about the needs, history, security etc of another country? Another part of the world?

I was politely silent when attending their event, but now I can open my mouth and send my words out to be read.

Your comment is a historical farce. Go read some elementary history books if you think the 13 Colonies made a revolution because of a tax on tea.

From the same PBS series you linked to, read CAREFULLY about the Stamp Act. Try to find the key sentence.

But beyond all that, imagine creating a previously nonexistant world with minimal government bureaucracy and intereference, minimal taxation, freedom of expression and pursuit. This is what the US "founding fathers" put in pen and print, not only in the Declaration of Independence and the Consititution but also in the discourses and public and private writings.

Did they succeed 100%? No but they sure came up with a winning formula, a better mousetrap which 100s of millions of people overall managed to live by satifactorily and many other nations envied to immitate.

These guys were pretty impressive for their time. We seem to take it for granted today.

Chazal say "yesh chochma bagoyim" - "there is wisdom to be found among the nations". These guys certainly had it. In fact, we can't say the same about Jewish and Israeli leadership today, for the most part.

All of the above, however, has nothing specific to do with the current demise of the United States. I won't take the word "demise" back, my fellow Americans. The US can still save itself but only if its citizens wise up as to how foolish and ignorant they've become of their own potential rights and worth and to how decadent and depraved levels of morality have reached in the US. (NOTE: we shouldn't talk). It will take another revolution to fix America.

It was money, shy. The rebels wanted the money to stay in the colonies. They didn't like being exploited by the British.

That's what the rebellion was about, not freedom and liberalism etc.

Correct that they weren't against taxation; they were against exploitation. The "mother countries" milked their colonies for products and money.

What kind of freedom do you think you would have if you were excelssively taxed with the main benefactor being some kingdom 1000s of miles away and if you didn't hand over the money, you would be subject to penalties, incarceration and seizure of property?

Don't you realize how miserable a life that would be? That's not freedom. That's tyranny! They were made into perpetual slaves of George the 3rd.

And here's the sentence from PBS's page on the Stamp Act:

"What outraged colonists was not so much the tax as the fact that it was being imposeed from England."

Think how we here feel that we have voting rights for parties to represent us, yet they do a miserable job of it.

Now think what life would be like here without being able to vote in a single such representative, rather the EU, US, Russia and the UN will make decisions for you.

Canada, Australia etc
They didn't rebel like the 13 colonies. Their independence evolved differently.