For those of us who consider watching the final round of the International Jewish Youth Bible Contest a highlight of Yom Ha'Atzma'ut, Israel's Independence Day, the year a blind boy from Netivot won was certainly one of the most thrilling. But I don't remember anyone mentioning that without his twin hearing aids, he couldn't hear a thing, because he's deaf, too. 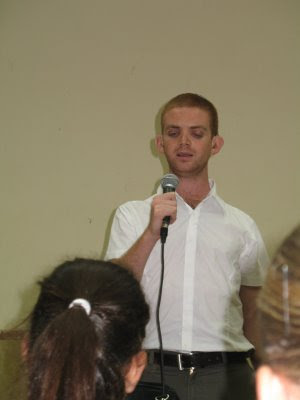 It's an amazing story of perseverance and faith. Avichai was born perfectly healthy with all his faculties and senses. He lost his hearing from an illness and the medication prescribed to save his life, and he became blind as the result of six unrelated accidents.
Avichai held the attention of the youth and adults in the audience as he told of his attempts to win the Bible contest, starting in his first year of high school. Each year he progressed but just missed getting into the next stage. He told his story with wry humor. Even though we all knew that he'd win in the end, there was still suspense considering all the obstacles in his way.
His parents raised him to be strong and not consider himself handicapped. They fought the system, refusing to allow him to be shunted into any Special Education facility. When the Ministry of Education "experts" refused him transportation to the regular school as sanctions against his parents' refusal to enroll him in special ed, the parents took him to school themselves and made sure he got the help he needed. Eventually, the school system gave in when they saw that he was getting good grades.
And when Avichai decided that "three strikes were out," and he wasn't going to try to win the Bible Contest a fourth time, his parents then egged him on until he was willing to try just one more time. Yes, the rest is history.
Avichai also took on the army and got his way serving three years in Modi'in, Information. Then he decided to be a stock broker and passed those tests, too. Now he's studying law and refuses to tell what his next goal is. I guess it's either being a judge or a politician.
Good Luck! No doubt he'll succeed.
Posted by Batya at July 23, 2009