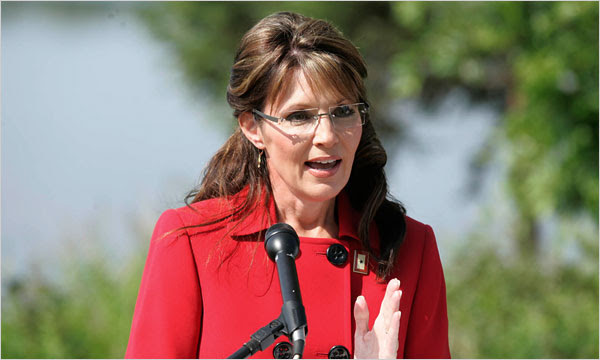 Sarah Palin Resigning as Governor
I watched and listened to her explanation, and honestly, I can't quite figure it out. Apparently I wasn't the only one surprised. After barely a year in the spotlight as Republican hopeful, she seems to have said something about contributing to the country and Alaska without formal office and party. Does this mean that she's going to spend more time campaigning for the U.S. Presidency?


Unless Obama really messes things up, no Republican has a chance against him in 2012.

1) The media and the left were in fact so ugly that, for her family's sake, she's stepping down and will live off of the revenues of the book deal she has signed up for. I don't buy this because I think she would have had no problem finishing her term as governor before leaving politics behind.

What would that calling be? America is historically/politically falling flat on its face. The Republican Party is a shadow of its former self, much like the Likud leaders of today are no different than the Labor Party of Yitzchak Rabin.

In this vacuum have stepped in the RINOs (yester-decade's Democrats) and the isolationists (Paul, Buchanan and the rest of the ugly American racists).

Palin wants to steer the US back to classic conservative values. How? Where? With what? I have no idea.

Overall, I'm a Palin fan. I don't know yet if she's presidential material or not but she's a normal human being, something hard to come across in any political landscape nowadays.

Shy, she's still young, and you can hear her son and/or grandson babbling during her speech.

The presidency would be an easier life.

I don't think Palin is looking for "easy".

And I think her resignation coinciding with July 4th is far from coincidence and is totally representative.

If I'm right, I wish her the best of success. The US needs it.

Shy, I broke my rule about sarcasm.

I agree that she has great potential and she's the only unforgettable non-grey Republican.