The world practices a very tyrannical form of hypocrisy when it comes to Jews. Of course, the major practitioners deny any anti-Semitic overtones, but "a rose is a rose" and anti-Semitism is still anti-Semitism no matter how you window dress it. That includes when it's practiced by Jews.

How anyone who claims to be liberal, democrat (small "d,") pro civil rights etc can be in favor of forced apartheid to create judenrein territory (Jews out/forbidden) is beyond my simple intelligence.

There's a town in California, United States, named Shiloh. It would be illegal to ban Jews from buying land, building homes etc. The basis for that name is the Shiloh where I live, in the Biblical HolyLand.

Prior to the establishment of the State of Israel, the Zionist leaders had no problem defying the British Mandate rulers building Jewish communities wherever they felt it important. 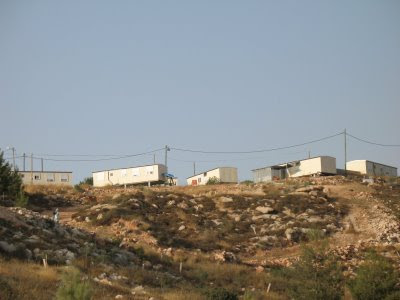 There's a waiting list for homes in Shiloh, especially for small rentals for young couples. Shiloh is an easy commute to most of the country, Jerusalem, Tel Aviv and the Jordan Valley.

Once people are more established, they're happy to buy new homes. And yes, as you can see, we're building. 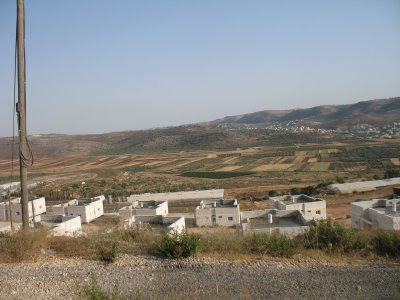 that claim that those who are again setlements are like the germans that wanted germany without jews makes no sense.

An israeli arab cannot fell in love with a fellow palestinian and marry her and form a couple in Israel.
Israelis do not let pali towns flourish inside Israel proper so its understanble that Palestinians do not enjoy to see Israeli towns flourish in what they regard to be the territory of their future state.

Palestinians are forbiden to build homes and cities inside Israel and I am not sure you will call it racism .

antisemitism can be defined as unjustified hostility or hatred towards a certain group, the jews.
When it comes to the palis...,they do not have " unjustified hatred ".
They just hate Israelis.
I Quote jabotinsky in the paper us and the arabs , written in 1923.

The vast areas of the U.S. never contained more than one or two million Indians. The inhabitants fought the white settlers not out of fear that they might be expropriated, but simply because there has never been an indigenous inhabitant anywhere or at any time who has ever accepted the settlement of others in his country. Any native people – its all the same whether they are civilized or savage – views their country as their national home, of which they will always be the complete masters. They will not voluntarily allow, not only a new master, but even a new partner. And so it is for the Arabs.

This is not hard to understand.

Palestinian resistance to setlements has nothing to do with antisemitism.

As jabotinsky wrote : Any people anywhere would react like the palis react when they others building in territory they see as their own.

People involved in the midle east conflict cannot see the most simple truths.

We are not here because this or that 20th century Zionist said we should be.

The first Rashi commentary in the Torah:

In the beginning: Said Rabbi Isaac: It was not necessary to begin the Torah except from “This month is to you,” (Exod. 12:2) which is the first commandment that the Israelites were commanded, (for the main purpose of the Torah is its commandments, and although several commandments are found in Genesis, e.g., circumcision and the prohibition of eating the thigh sinew, they could have been included together with the other commandments). Now for what reason did He commence with “In the beginning?” Because of [the verse] “The strength of His works He related to His people, to give them the inheritance of the nations” (Ps. 111:6). For if the nations of the world should say to Israel, “You are robbers, for you conquered by force the lands of the seven nations [of Canaan],” they will reply, "The entire earth belongs to the Holy One, blessed be He; He created it (this we learn from the story of the Creation) and gave it to whomever He deemed proper When He wished, He gave it to them, and when He wished, He took it away from them and gave it to us.