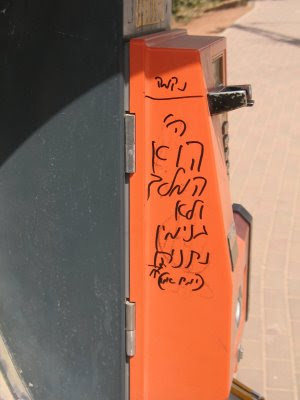 It says:
REVENGE!
G-d is the King
Not Benjamin Netanyahu
(May his name be erased)
Posted by Batya at July 06, 2009

Email ThisBlogThis!Share to TwitterShare to FacebookShare to Pinterest
Labels: graffiti

dont you think the yemach shemo is a bit excessive? just to be on the safe side, dont you think you should condemn it, just so no one gets the wrong idea?

"excessive?"
a, who are you?
What's the "wrong idea?"
I reported what I saw. What's a "safe side?"
I suggest that you bombard Bibi with your suggestions. He's endangering us, the Jewish People, the State of Israel.

My Rabbanim taught me that it should be an extreme rarity to say "Yemach Sh'mo Ve'Zichro" about any fellow Jew, with the exceptions of very wicked ones.

And example of such a wicked Jew would be Yousef Al-Khattab, formerly known as Yosef Cohen. For those that don't know, Google him.

How about Rabin? Sharon? Netanyahu?

It's disturbing. And like a lot of graffiti, it ain't fit to be shown.

I disagree with both Muse and Ellen. :)

I think that was A's main point, that such graffiti is perhaps inappropriate. He asked is it excessive or should it be condemned? Good questions for discussion.

Disturbing? Maybe. Depends perhaps. Not fit to be shown? Why? Because someone (age 10? 14? 28? 75?) has a very harsh opinion of Netanyahu? I think that's a fair topic of discussion.

shy, you got it right in the end. We have to recognize that the younger generation experienced Disengagement and Amona. They are hurting, and we have to help them, not censor them.

Muse and Shy,
I'm the last person who wants censorship, but a)graffiti on public property is a form of vandalism that usually stems from anger and despair. So I think the term "disturbing" to describe it (the act, the mood, and the message) is not inappropriate.

b)as an artist and writer,I strive for a certain refinement when expressing a thought and communicating a message. It's a real struggle in these dark times. I really long for the day when we as Jews can get out of the despair mode and direct our energies towards creative solutions.

I think it's so important for the kids who did witness the destruction at Gush Katif and Amona to learn to express themselves in a way that will energize and strengthen them for the battles that life, and living here, brings.

I guess the picture just made me sad, and reminded me of how far we have to go. That's my opinion. But if it inspires you and generates discussion, then go for it!

BTW I'm all for hard-hitting political satire, cartoons, caricatures and creative graffiti messages (that don't vandalize)to express disappointment and the need for political change.
And I taught political cartooning to teens during the Oslo years

In no way did I mean to condone the vandalism aspect of such graffiti.

Shalom!
I agree with Shy Guy and anonymous, who were bringing up a point of halacha. I've learned that the only Jew that should be paired with "yemach shemo" is "the J man", because he led so many so far astray. The standard phrase is "the name of the wicked should rot". Has anyone else reached the level of apostasy that "the J man" did? Well, unfortunately, others have tried and are still trying...

Find a way of working with the kids, please.

How about letting them use their artistic talents on the Israeli side of the security fence.

It's dead ugly and anything scribbled on it is only an improvement for sore eyes.

Shalom!
Don't the kids have some sort of mo'adon? Every community I've ever seen has had at least one mo'adon or snif that is "decorated" on a regular basis.
If that's not possible, be creative. We had a "Shabbat irgun" when we were still stuck in the hotel four years ago. The kids hung huge pieces of cloth in the underground parking area and painted them as they would the walls of a snif.