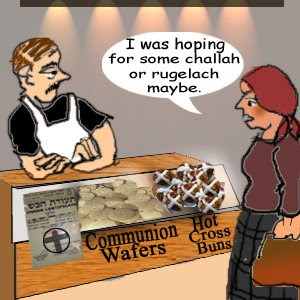 a half-baked case:
Should a Jewish convert to Christianity be trusted with matters of kashrut? The Chief Rabbinate said “no”. The secular Supreme Court of Israel – which in recent years, has been telling the Israeli Rabbinate how to keep kosher - said “yes”.
This issue of apostasy is sure to cause major controversy and confusion as halachic authorities and the secular courts clash. Rabbi Tovia Singer of Outreach Judaism gave Jewish Israel – and the media - a hand in defining just who is not a Jew...more

An update on the Rabbi Riskin report

A day after Jewish Israel posted a controversial video clip of Rabbi Riskin, and filed a report on some of his contentious interfaith theological endeavors, Israel National News asked Rabbi Riskin for a response.

Jewish Israel would like to thank INN’s Hillel Fendel for taking the initiative to follow-up on our concerns and findings with his own very thorough report on Arutz 7’s English site. And we are pleased that Rabbi Riskin took the time to respond and expound on his positions. We also appreciate Rabbi Riskin’s retraction of the term “resurrect” and his admission that, “It was definitely the wrong choice of words and I should have not said it.”

Rabbi Riskin’s explanation not only validates Jewish Israel’s concerns, but it also prompts further questions - and it leaves a lot of issues unresolved. Jewish Israel will continue to report on this matter and will keep you informed of developments.

The full version of the ICEJ Ministry of Comfort video can be seen online in a number of locations – including the ICEJ site.
Posted by Ellen at July 02, 2009

Shalom!
I do not equate apostates with any other type of Jew.
I have an annoying question. Can an anti-religious Jew who wants a kashrut certificate only in order to increase his business or a Jew, even a completely religious Jew, who is not well versed in Jewish law be relied on to maintain standards in his business without a supervisor on premises at all times? The answer is no. This is a bit off topic, I know, but after attending a series of classes given by the head rabbi of Kosharot, I've come to realize that the kashrut situation in Israel is extremely complex. Guard your souls!

Ellen, you've brought a very important case to our attention. Unfortunately I think that our only recourse is to not rely on "simple" certification, but to seek out "mehadrin". Remember the case of Hod Hefer? The court forced the rabbinate to give the company mehadrin certification even though it wasn't keeping mehadrin standards anymore. The rabbinate informed the public, first and foremost local rabbis, of the situation. Huge numbers of stores refused to stock the chickens. After significant losses, Hod Hefer returned to maintaining proper standards. Publicizing cases like this is also important because it informs the public of what to avoid.

Shalom Hadassa,
Your question isn't annoying, but it is thought provoking and more than disturbing. Kashrut is no simple issue, but we're a society that wants simple answers and easy fixes.

a lot of Torah observant Jews will, unfortunately, turn a blind eye to the problem in order to avoid making waves (which makes you wonder how Torah observant they really are)

I've heard from others about the "mehadrin" solution. I'm not sure where I hold on that.
But I do know that I don't want the secular courts making decisions on kashrut or on who is, and who is not. a Jew.

Ellen's bottom line is what counts: secular courts can no more dictate Halacha than they can diagnose and treat a cancer patient.

Regarding regular kashrut versus mehadrin, Rav Melamed, in his weekly Ba'Sheva page a few months ago, stated clearly that the regular kashrut levels in this country are generally problematic. To put it in one word: substandard.

Rav Melamed advised that people (of the Dati Leumi crowd) should move to a mehadrin standard.

Now think for a moment. What if a non-Jew or a heretic wants to run a Mehadrin business? The same court will say the same thing over again.

This nonsense of the courts will stop when the Jewish majority in this country starts putting the political and judicial systems in this country in their correct places.

This won't happen overnight. Let's all keep on working at that in whatever ways are available.

The dati leumi public with its tendency to give a blank check of approval to the official "Zionist" rabbinate, is part of the problem. Now after the expulsion a lot of chickens have come home to roost. As a result there is more healthy suspicion and serious Jews relate to kashrut on a factual, case-by-case basis. By the way, there are a lot of faux mehadrin certificates around, and you should check with your rav before you assume that you can eat in a place or buy their product just because it has a certificate with the word "mehadrin" or "hidur" or the like in it. There is enough acceptable rabbinate mehadrin and hareidi badatz certification that you don't have to eat by every Tom, Dick and Harry who puts up a sign saying that he is kosh, kosher, koshest. Kosharot is doing great work, keep it up.

Shalom!
I'd like to clarify one point. Buying mehadrin does not mean not buying products authorized by the Rabbinate of Israel. Some, not all, branches of the Rabbinate supervise products that adhere to very high standards.

Now think for a moment. What if a non-Jew or a heretic wants to run a Mehadrin business? The same court will say the same thing over again.


I mentioned the Hod Hefer case because of situations like that. (I heard it first from Adir Zik, z"l.) People who buy mehadrin are virtually always more concerned with kashrut standards than others. The court instructed the rabbinate to give Hod Hefer a hechsher mehadrin, despite the lack of adherence to mehadrin standards. Public refusal to purchase the product forced Hod Hefer to adhere to mehadrin standards. Nobody who keeps mehadrin standards is going to buy from a non-Jew or a even a Jew, observant as he (or she) may be, that doesn't have a kashrut supervisor on the premises at all times. Concerning buying from heretics... that's a different matter.

Bottom line (or one of them), what the consumer demands, the consumer receives. The mehadrin line of Tnuva and Strauss grows every year.

Rabbis from Kosharot (based in Elon Moreh, where I live) travel around Israel giving lectures. At least one of the rabbis is an English speaking American and will lecture in English. The lecture includes a computer presentation and printed material.

P.S. Shy Guy, I tried to italicize the quote, but couldn't. Sorry.

Hadassa, there is a difference between buying chickens, usually requiring a distributorship, versus shops on a main thoroughfare hanging a Teudah to invite people to come in.

I myself would normally have a cup of coffee in a non-Mehadrin cafe but now in cases like this one. I cannot trust the proprietor with a 10 foot crucifix.

Regarding italics, it's simple. :)

Shalom!
Shy Guy, that's my point. We can only trust "mehadrin" products and establishments, because the "mehadrin" public won't tolerate a "mehadrin" label that's bogus - unlike the general public that sees a certificate and doesn't ask questions. With the "mehadrin" crowd, what goes for a package of chicken, goes for everything else too.
I also read the article in B'Sheva by Rav Melamed. I hope it woke people up. It happened many years ago, but it took a rav like him to make me realize that the different levels of kashrut are much more than "politika".
Thanks for the link. I didn't have time to look earlier.