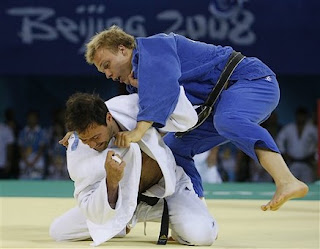 For the past few Olympics, Israeli athletes have won medals. The pre-Olympic hype was pretty confident over-confident that the delegation would be back with a few, for sure.

What's for sure? Mark Spitz in his prime? Maybe Michael Phelps this year? And even if Phelps breaks Spitz's record, someday, someone will break his.

Maybe my kishkes have it wrong, but as soon as I heard that Alon Mandel would be in the Olympic pool rather than following the Jewish laws of mourning for his father, those overly optimistic proclamations by the Israeli sports people seemed set up for a jinx.
Some Israeli athletes are still in the running for medals. I wouldn't gamble in either direction. Soon is Shabbat, when we're in a "different space/dimension."
Is there more to sports than winning? What's winning? Isn't it how you play the game? Define "game."
Shabbat Shalom U'Mevorach
May you have a peaceful and blessed Shabbat
Posted by Batya at August 15, 2008

Shalom!
We shouldn't be at this heathen circus at all. Rabbinit Esther Levanon said it best this past week in the Hebrew BeSheva: "We aren't meant for this." We have other roles to fill. Other than keeping ourselves healthy, sports are not for the people to whom G-d gave the Tora and sent out into the world to be "a light unto the nations".
The Rabbanit comments on sports from time to time, always with the same message: relax, enjoy yourself, be healthy, but never forget what your priorities are.
Hadassa

Very, very true. Something perverse in our priorities.

Here we go again. The religious, who believe in something the rest of us can neither see nor feel, express an opinion that is based in neither fact nor logic.
A G-d (out of respect for your beliefs I leave out the o) who has no proof of existence (I'm an atheist born to Jewish parents) will mysteriously jinx the entire Israeli team because one of them dares to swim and break a MAN made rule about how to mourn.
Ian

Sorry, Ian, please respect my beliefs and I'll be polite about yours.

Batya,
I absolutely respect your beliefs, but the religious, in general, have absolutely no tolerance for those who have an absence of belief. Please note the distinction belief vs. absence of belief. You may do whatever it is you wish to do or believe in up till the point where it impacts my life.
Ian

Ian, there was great hype before the Olympics, such over-confidence, bragging that certainly this year we'll win lots of medals.
Then what happened happened concerning the swimmer, and I had a feeling about it.
I'm not surprised at the results, but I'm also old enough to remember the Olympics when Israel sent entire groups of athletes who never even expected to make it into the finals.
Actually, I was hoping to be wrong. And I think the religious athlete from Kochav Yaakov, of all places, hasn't had her chance to compete yet.

Batya,
That's Israel and it is quite typical to over hype things in the Israeli media. OTH One needs to look at the big picture: A small country which is really insignificant in the bigger scheme of things both from an economic and geopolitical perspective. Really, Israel should compare themselves to other countries which have 5 million citizens which are actively engaged and supported bu their goverment. I purposely leave out about 2 million Arab citizens because they do not receive the same levels of care and attention as Jews despite to all intents and purposes being full citizens.

Shalom!
Ian, have you learned enough Judaism to know whether or not it, as a whole is logical? The Jewish people do not lack scientists who are as uncompromising on their religious beliefs as they are on their scientific methods. There is no contradiction between logic and the Tora. Today science has shown us that believing in evolution requires more faith than believing in the Bible - and that's just one example.
Consider the way the Arabs - on both sides of the "Green Line" - treat the Jews. In return for destroying anything Jewish on the Temple Mount (plenty of secular archaeologists furious about that), destroying the Negev with illegal building, Kassams, Katushias, suicide bombers etc. we give them free water, free electricity and free or almost free medical care. And if we're so cruel, why do the Arabs on the "wrong" side of the "Green Line" run to us for protection and medical care when their internecine violence gets out of hand?
Hadassa
P.S. Please don't make insults like stating that the laws of mourning are man-made. They're not.