Yasamniks for Yeshua and Rhinestone Cowboys for Jesus

CBN (Pat Robertson's network, which is directed by CUFI executive board member Michael Little) has recently put out this glowing report on "messianic Jews" in Israel
[Note: the site of the posting identifies itself as "Christian Zionist"]
The Jewish Cop and the Christian Missionary tie the knot

Some of you may recall my newsletter last year about a cute self proclaimed “missionary volunteer” for Christian Friends of Israel (CFI), who seduced a yasamnik and brought him to Jesus. Well, they were married in a messianic ceremony. The story behind this is intriguing…
Last year the Chief Rabbinate proscribed Jewish participation in the annual Christian Feast of the Tabernacles Convention and the Succot march - due to a missionary presence.
Witnesses reported that some missionaries were indeed proselytizing and working the streets during the parade, but nobody imagined that Yassamniks for Yeshua would put in a rather aggressive appearance , too.
A mild-mannered gentleman was distributing flyers, warning of missionaries, when three yassamniks confronted him and got a little pushy. He noted that the one pictured in the middle was especially “zealous” in his reaction. 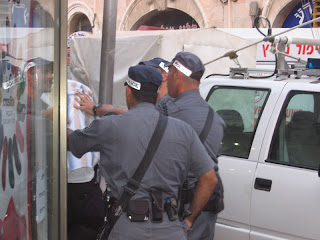 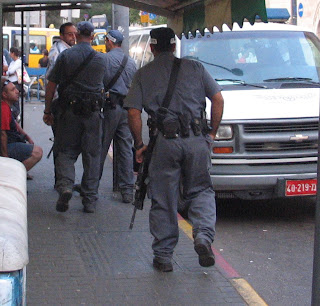 As it turns out, his missionary girlfriend was on the beat with him. 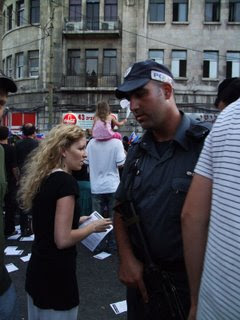 Enter CFI missionary Erin's site and scroll down, past all of those stunning wedding photos of the kallah, kisses, ketubah, kippa and tallis (there was no chupah, nor were the groom’s parents present), and you will see our cop baptized. Another lost Jewish soul, but it appears that we are left with one less brutal yasamnik to deal with - so you decide if it’s “good news” and if we should bless or curse this Judeo-Christian union.
The story doesn’t end here. The happy couple, Erin and Tomer, are starting a new site called
messianic defense.com - “a website in defense of persecuted Messianics in Israel”, and she has another site called “forced exile”, where deranged rapper for Jesus Aviad Cohen makes an appearance in the form of a talk-back.
And speaking of fading stars…
"Messianic Judaism" has gone Hollywood Chic

Reuters reports: Glen Campbell's new home in Malibu probably resembles the residences of many other successful musicians in the wealthy beach resort. The Baptist-raised country star, who says he once confused "menorah" with "manure," displays a Jewish candelabrum on the mantel, and a Hebrew book sits on the coffee table...the Rhinestone Cowboy soon breaks into a plaintive cry, "Jeee-esus ... Help me find my special place."

Very alarming. This may be just the cream of the crop, I heard that CUFI is having a "mega-event" sometime in October where Israel will receive tens of thousands of "friendly" tourists who will roam around the streets doing G-d knows what.

At present, Christian tourism is a vital industry in Israel. And I have no problems with the Jewish state welcoming and providing top-notch services for the various visitors of all faiths that come here.

However, encouraging mega-missionary events and messianic church revivals is something we as Jews should not be doing.

We need to lay down the law with strict anti-missionary legislation and halachic guidelines.

Shalom!
Vital industry? Since when has allowing idol worshipers into Israel been a vital industry? I'm not saying that we should ban non-Jewish tourists, but considering them vital is contrary to "Am levado ishcon".
Hadassa

Hi Hadassa,
I qualified my statement by saying,
" At present Christian tourism is a vital industry..." Meaning that in the future I hope it won't be vital.

Israel should be able to develop its tourism industry without crossing halachic lines, or having our economic well-being hinge on a faith that is foreign and forbidden to us.

You may want to do some more research on The Fellowship before leaving so many ridiculously false comments. First of all The Fellowship takes NO PART in evangelism. Since Christians and Jews share common beliefs dictated within the old testament the "discussion of the Gospel" is of course endorsed, however evangelism is NOT.

Also regarding the Rabbi's salary, you might want to check out charity navigator or givewell.org and you will see that The Fellowship's allocation of administration costs are excellent and they are rated with three stars for efficiency in fundraising/stewardship.

Also, before proclaiming that one day you hope tourism by a "forbidden faith" isn't vital to Israel, you might want to investigate what exactly that "forbidden faith" has done to support Israel that have nothing to do with missionary legislation, but rather respect for a common history and hope for tolerance and understanding.

Here are some FACTUAL statics about The Fellowship...

In 2007 The Fellowship rebuilt roughly 2,000 bomb shelters in Sderot, Ashkelon, and northern Israel

Thousands of Israelis eat in Fellowship-sponsored soup kitchens each day

300,000 Holocaust survivors are receiving stipends from The Fellowship in 2008

Anonymous,
I just re-read my post, and I fail to see "so many ridiculously false comments". I simply quoted the Fellowship's policy on evangelizing, and I quoted and linked to Eckstein's salary figures. I also made mention of his bid for property on Mt. Zion. Is something untrue here?

You, on the other hand, gave a whole lot of information...
First of all, according to standard dictionary definitions, the Gospel is defined as :
a: the message concerning Christ, the kingdom of God, and salvation
b(capitalized): one of the first four New Testament books telling of the life, death, and resurrection of Jesus Christ; also : a similar apocryphal book c: an interpretation of the Christian message

In this sense the Christians and Jews share no "common beliefs", and your reference to the Fellowship's endorsement of "discussion of the Gospel" amounts to nothing more than politically correct evangelism.

Please understand that the amount of generosity pouring forth from Christian sources cannot negate the fact that Christianity is a "forbidden faith" for the Jews. No amount of money and humanitarian aid can change that. And the sooner the Christians understand and respect this, the better off we will all be.

I long for the day when Gentiles can once again generously and even anonymously support Israel without the name of christ attached. I was fortunate enough to see hundreds of thousands of dollars and services contributed to Israel from Gentile sources who felt no need to spread "the Word" and kept the "good news" to themselves.

the truth about the mistaken jewish soul

Remember! These guys were involoved in the brutal expulsion the Jews from Azza and North Shomron.

A Stranger In A Strange Land said...

Bareket 57 Which guys were involved in the brutal expulsion the Jews from Azza and North Shomron? The Xtians?