Why there won't be elections in Israel soon. 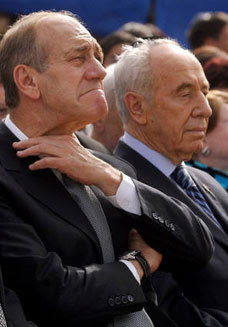 Olmert's a wily guy. He's the most technically competent of politicians. He knows how to manipulate the system to his advantage. He loves power, and he will use all his wiles and skills to delay elections for as long as possible.

Olmert knows that his Kadima Party is falling apart. Even though Bibi talks of deserters wanting to return to the Likud and other parties, they all know that most of those politicians aren't really welcome. Members of the Olmert cabinet have not succeeded in maintaining or gaining the respect of the public.

The Olmert cabinet is holding firm for its survival.

Polls have been too consistently against Olmert for Olmert to relax his reign. He's not stupid. He's hoping that his ratings will improve before the next elections. Legally, he has another three years!

Poll: If elections held today, Olmert would be thrashed by his rivals (click headline for entire article)

Poll: Olmert should resign 72% Olmert most appropriate to be PM 3%
original article and translation
Posted by Batya at 6:25:00 AM

It's divide and conquer, like with Sharon and Olmert knows how divided
Israelis are; Chareidim, Datim, S'fardim, Chilonim, "consensus areas", Yehuda and Shomron, Golan, etc. each vying with the politicians for their piece of the pie; it's about the money and ALL about the money. And they will each stab the other in the back for it. That is what Olmert knows.

One way to beat a Technicrat like Olmert and his despicable ilk -- 100,000 people in front of Knesset or some other high-profile establishment location 24/7 -- many hundreds of thousands of people in shifts. But Israeli's lack that level of committment and so they will be saddled with leaders like Olmert, Peres, Peretz, Livni until they get the backbone and "fire in the belly" to emulate the Ukrainian model.

100,000 won't do it.
We had hundreds of thousands against Oslo and Disengagement.
Rabin said we can go".." or "spin like propellers."

Consensus will build but it takes time.

I never did figure out what Kadima was supposed to stand for.