I actually planned and prepared this post months ago, during Succot.

It's very annoying and inaccurate that people who aren't familiar with the facts on the ground here in the Shomron, north of Jerusalem, Israel, have such a totally distorted view of things.

My neighbors and I live in small, modest homes. Yes, that's the truth. The large, enormous mansions north of Jerusalem all belong to Arabs. For the longest time, I had been thinking of trying to sell a photo-story showing those elegant structures. Then finally during Succot, I mentioned it to a neighbor who said that he'd love to drive around with me, while I took pictures. thanks ms! So we went off one day and were amazed at how many gorgeous mansions were between Shiloh and Jerusalem.

I couldn't find any paying publication to buy them, so, as a blogger, I'm my own boss, editor, etc. Actually, since then, so many more have been built. I don't know how the Arabs build homes so quickly.

Enough chatting. Remember that a picture is worth a thousand words, so... 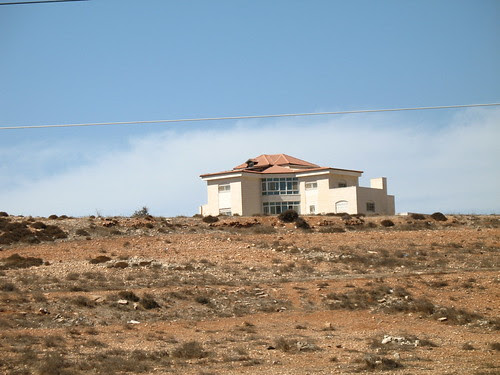 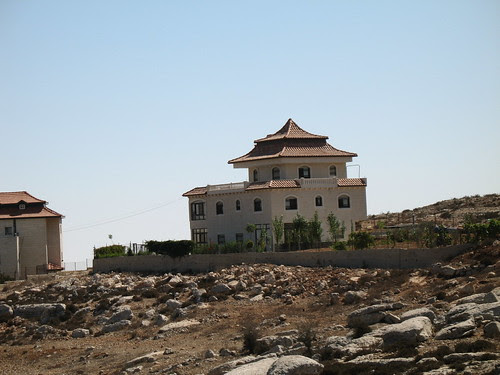 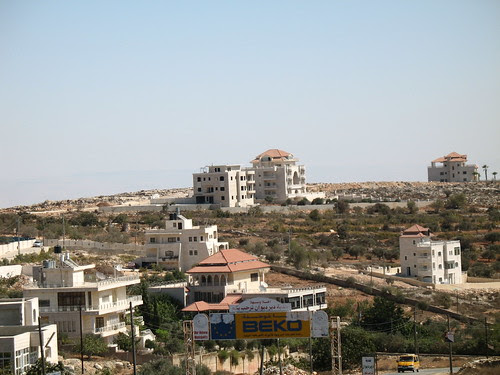 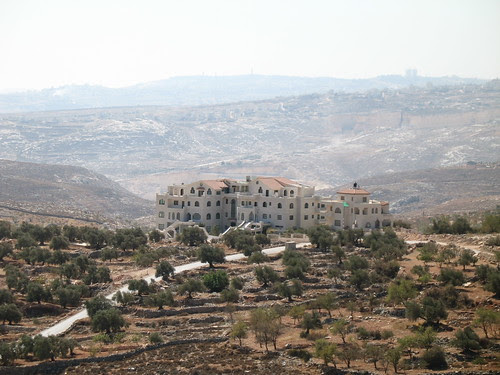 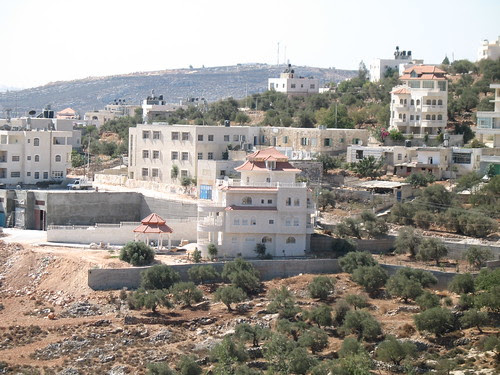 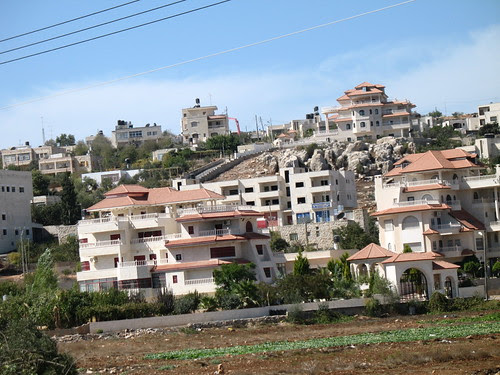 Wow! We have a few like that near us, but not so many!

There are so many more since I took those pictures.

Can you give us some details (the type that a media org. could check out) on who owns the land, who is building these houses, who owns or will own them, etc.?

Whether it's state land, private land or just some squatters, I'm just a blogger. Maybe "peace" now has the info.

Back in 1988, Commentary Magazine had a symposium on Israel and the Palesitnians. One of the writers, Edward Rothstein, wrote about how the tales of oppression differed from what he observed and saw all the TV antennas looking like the Eiffel tower. The observation is similar to yours.

And did you notice how much land is empty?

The empty land was also true of Gaza.

All arabs are wealthy. I have never seen a poor one. I have lived in ISrael for three years and it is the Israelis who live in tiny crappy apartments, all Arabs live in mansions. That is why I dont feel sorry for 1948, the Arabs fled their rich houses. I live in one in Rehavia and I am proud that my family was able to pull itself up from the Shtetl of russia so I can live in a wealthy Arab mansion. The average arab in ISrael has 1,000 sq. meters in their home than the average Jew. The average Israel-hating leftist whose ancestors were nazis in Europe is 53 times wealtheir than the average Israeli. That is why the next time you see a european you should liberate his car and walet.

true, sd
and Nixon, I understand that your exagerations are to make a point.
Thanks for commenting.

these mansions are all built by arab workers who built identical structures around TA. they take the blueprints and build them for a tenth of the price.

One thing for sure; they have gorgeous homes.

This is an excellent example of why all of you in Israel and the palestinian states will never agree or make peace. The world should just leave you all to figure it out alone.

fine with me
We'd be better off without the busy bodies who just endanger us.

Apparently, Israeli Arabs in fact earn incomes which are up to four times what they report for tax purposes (the rest is earned on the "black market"). It's not clear whether the "four times" figure in fact reflects the entire Arab sector, but when officially reported Arab income is 70% of Jewish income, it seems that the average Arab may in fact be richer than the average Jew.

And besides that there must be somone, something making major investments.
Lots more new building since I took those pictures.

I've been in some of those Palestinian "mansions" - like in Beit Hanina. They are built big like that because it's not just one family there. It includes uncles, cousins, grandparents, grandchildren, etc. That's how they live. So it's not like the large mansions us westerners would build just for themselves - had we the money.

gypsy, it's not so simple or benign

These mansions are mostly new, within the past year or less. They haven't grown gradually with the family. Someone/something has recently been shtupping major millions into those villages.

Ahhh so I guess this blows the old propaganda statement that any money Palestinians get go towards buying guns and bombs. Good for them. I hope they build more like that. I guess it must irk a majority of you Isralis that you have no control over Palestinian-Americans that make good and build nice houses for themselves over there. You need to get over it and get over yourselves.

You should take pictures of the Israeli mansions with built-in swimming pools overlooking a people who don't have enough water to drink or electricity.

You should be ashamed of yourselves for trying to make this into something its not in an attempt to make yourselves appear to be so deprived. Have a look at the US Aid statistics where monies alotted to build settler houses. Meanwhile Americans live in cardboard boxes on the streets.

American money has built some of those mansions and nothing like them exist for Jews.
Certainly, just like in Southern Lebanon, some of those buildings are just hiding military installations for attacking Jews.

That's the truth, not your hateful lies.

Arab mansions? They may be Arab built but I highly doubt that Arabs are living in them!Arabs would never put those despised red roofs on their own houses.Why don't you just admitt you've stolen a peoples homeland and you're still trying to justify it 60 years later.

Renee, I don't know who you are, but you really don't know what your're talking about. The Arabs of today build and live in homes with red tile roofs. Since you got that wrong, and you totally ignored the pictures, then you obviously got the rest of your rant wrong, too.

Nixon you are sadly ignorant. left leaning jews or pro peace jews are no less pro israel than you.