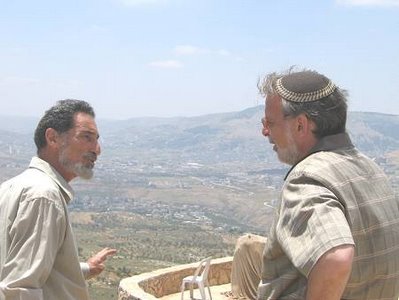 The above picture is from the Elon Moreh-Shechem website, wherein it says:
20 Iyar, 5766 - May 18, 06 - Dov Hikind Visit
NY State Assemblyman Dov Hikind has been a strong supporter of Israel and has visited Israel many times. He was in Israel for a short visit to talk to leaders of the settlement movement about projects that he and others can take upon themselves to help thwart the plan for Israeli withdrawal from major parts of the Land of Israel. In Elon Moreh he met with Benny Katzover, one of the founders of the community and a long-time leader in the struggle for the Land of Israel. They discussed cooperation with other leaders in building an overall plan.

But in today's news, what a headline, from Arutz Sheva!
New York State Assemblyman Purchases a Home in Samaria
The Amanah Settlement Organization, helping to keep Israel's Biblical heartland Jewish, held a fair in a Teaneck synagogue recently - and among the many purchasers was NY State Assemblyman Dov Hikind.

No fewer than 12 homes were sold at the one-day event, mostly in Karnei Shomron and Kiryat Arba. The houses are promoted as a way of "keeping the Zionist dream alive" and "leaving your thumbprint on the destiny of Israel."

Another fair held in a Queens synagogue the same day yielded two more sales - one in Kochav HaShachar and another in Kiryat Arba. Other potential purchasers have shown interest, and are in contact with the organizers. More such fairs are planned for Chicago and elsewhere in the U.S.

Though Amanah encourages the purchasers to move to Israel and live in the homes, in most if not all cases, the homes will be rented out to Israeli families for a period of five years. Amanah will oversee the arrangements.

Hikind, an active and outspoken state legislator, has often shown his support for Israel in general and the residents Judea, Samaria and Gaza in particular. Before the Disengagement/expulsion from Gaza in 2005, he organized and led two solidarity missions to Gaza, explaining, "It's my obligation to support the Jews of Gaza. Israel is extremely important to me, as it should be for every Jew. No one would be concerned if a Puerto Rican congressman was involved in humanitarian matters in Puerto Rico, or if an African-American leader was concerned about Africa."

All I can add is, that I hope many, many more Americans will follow Hikind’s wonderful example. This is the best news we’ve seen in years!!! V’Shavu Banim L’Gevulam – may all of G-d’s children return to their true borders, the Land of Israel.
Posted by yitz at March 08, 2007

Wouldn't you like it even better if he resigned his job and made aliyah?

Well, yes & no. Perhaps he can still do more for Israel from America than he could if he were here. But certainly buying a home here makes Aliya that much closer!

Yitz, how could you say such a thing?!
We need him and his followers here in Israel full-time, not symbolically!!!

Firstly, I said, "perhaps." And secondly, I said nothing about his followers.
Batya, let's put it this way - we both agree that the most important things are Am Yisrael, Torat Yisrael, and Eretz Yisrael. A person should consider where he can do the most for these three, and when it's the right time to make Aliya! Best regards!